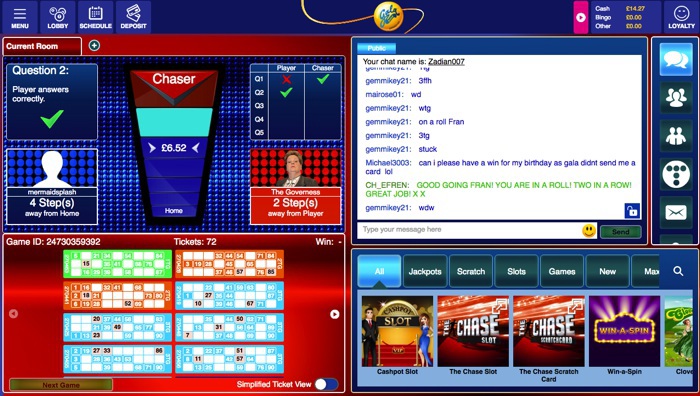 Have you ever watched the ITV daytime quiz programme the Chase? If so you’ll likely be a big fan of the bingo room based around the show. It features official branding, as well as appearances from the much-loved Chasers themselves. Bradley Walsh is notable by his absence but you can’t have everything. What you do get, though, is a red room with the Chase written in its recognisable font behind where the balls are drawn from.

You’ll no doubt feel like you’ve heard the voice of the bingo caller somewhere before, and that’s because regular watchers of the Chase will have done; in this game the balls are called by the Chaser known as the Governess. The room feature is modelled after a round of the Chase where you have to take on one of the Chasers in order to win a cash prize, but we’ll tell you more about that shortly.

Despite being themed after the Chase and have a feature based around one of the quiz show’s rounds, the game itself is actually the same as most other 90 ball bingo rooms. Simply select the number of tickets you want to buy, relax and keep your eye out for the balls to fall into a winning formation. Tickets are laid out in a classic format, with two columns of six tickets in each to mean that twelve tickets are on show at any one time.

As with the majority of 90 ball games, you’ll start off by hoping to get 1 line. Once that’s been achieved by someone playing the game you’ll move on to 2 lines. Again, the balls will continue to be drawn until someone’s chalked off 2 lines, at which point you’ll move on to searching for House. If you get 1 line, 2 lines or House at the same time as another player then you’ll share the prize associated with that formation.

The main feature of the Chase is, well, a chase. It’s a little complicated to understand if you’ve never seen the ITV quiz show on the TV, but we’ll give it a good shot. Whoever wins House will be given the chance to win an additional prize by beating one of the Chasers. You’ll go head-to-head against one of the Sinnerman, the Vixen, the Beast, the Dark Destroyer or the Governess.

Imagine you’re stood on a path with eight stones on it. You’re on stone number three, with two behind you and three in front. Behind you, waiting to come onto the path, stands the Chaser, whilst in front of you, three stones further away, is the bonus prize. Before the chase begins you’ll be given an offer; if you take a step back, further away from the bonus prize, then you’ll have a chance to win more money. Take a step closer to the prize and there’ll be less on offer. Alternatively, you can just stay in the same place and have the money offered originally.

For example, let’s say the bonus amount on offer is £5. If you opt to stay in the same place then you’ll have the opportunity to win £5. You can take a step closer to the Chaser and you’ll be offered £7.50, or you can take a step closer to the prize and said prize will reduce to £3. On the TV show contestants have to answer general knowledge questions in order progress along the board, with the idea being that a correct answer for them moves them forward and a correct answer for the Chaser moves them forward. If you get an answer wrong then you stay in the same place and you need to avoid being ‘caught’ by the Chaser.

With Gala Bingo, the Chase bingo room work slightly differently. The chase appears to take place as it would in the TV show, but you’re not actually asked any questions and instead the whole thing plays out according to pre-set results, so you don’t have any control over it. All you can do is choose whether to step closer to the Chaser, closer to the prize or remain in the same place. If you get ‘caught’ by the Chaser then you’ll be given a consolation prize, which is half of the lowest amount offered before the chase began. Is that all nice and clear now? To be fair, it’s self-explanatory when you play the game. Much like with the 1 line, 2 lines and House prizes, the bonus can be split if two people get House.

The jackpot in the Chase Bingo Room is a progressive one named the Final Chase Jackpot. It is one that is won by getting House within a certain amount of calls. So say, for example, that the winning amount of calls is 31 and you get House after 27 balls have been drawn then you will win the jackpot. Get House on the 32nd call and sadly you’ll just get the normal prize, as well as the opportunity to play for the bonus feature amount.