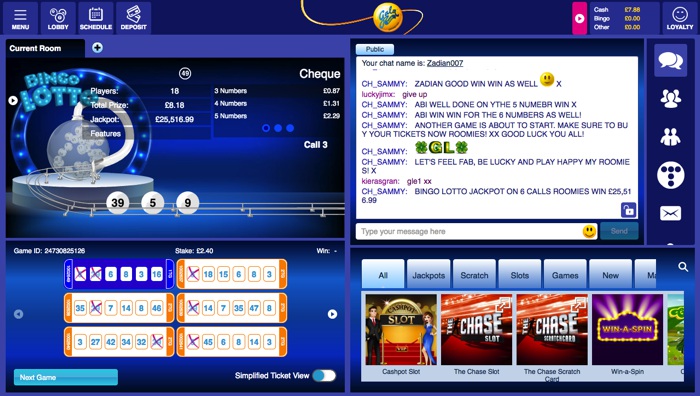 There are a number of bingo games that are exclusive to Gala Bingo and Bingo Lotto is one of them. This game is themed around the idea of the national lottery, complete with a voiceover that sounds remarkably like Alan Dedicoat, the announcer on the official lottery draw as well as such TV shows as Strictly Come Dancing and Children in Need.

The skin of the game also matches a lotto-esque look. Before the balls begin to be drawn you’re shown a machine similar to that used on the national lottery. Then, when the game gets underway, the balls ‘roll’ down a wire rack and into position. The idea behind the game is that it is a combination of two of the country’s favourite games, bingo and the lottery. In truth it’s essentially just a quick version of the Lucky Dip lottery format.

The game is played with 49 balls and even your tickets follow a lottery theme. Unlike normal bingo, where you’ll find you have lots of numbers and blank spaces making up your ticket, this is a ticket with just six numbers on it. The tickets line up in two columns of five, meaning that ten in total are on your screen at any one time. Much like with, you guessed it, the lottery, you need to find an amount of numbers rather than a line or a pattern in order to win.

As is the case with normal lotto games, you’ll need to find three numbers to win the first prize. The second prize is awarded to the user that gets four numbers, with the third prize being for five numbers. The final prize, much like with the jackpot in the lottery, is for all six numbers on your ticket to be marked off. Much like with most bingo games, if you happen to get three, four, five or six numbers at the same time as someone else then you’ll have to split the jackpot.

There is no additional feature to this game. It’s all about the winning of the various lottery-esque prizes rather than any clever feature that you can take part in for some extra cash. That’s not necessarily a bad thing in and of itself, however. It means that the game can rattle along at quite a pace and if you don’t win then you needn’t worry as another game will be along at any moment.

There is a decent size jackpot to be won in the Bingo Lotto Bingo Room. The major jackpot is a progressive one that increases with each game, starting at £25,000. In order to win it you need all six of the numbers on ticket to be called out within the first six calls of the game. It really is that simple. If you want to compare it to a more standard bingo game then it would be like every single number drawn was on your ticket and you went straight to getting House.