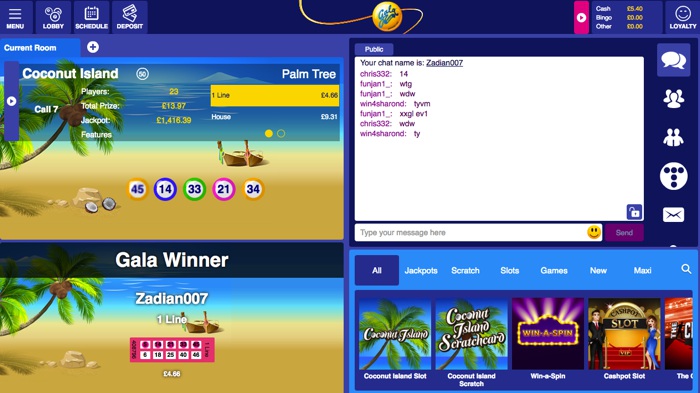 Coconut Island is a game exclusive to Gala Bingo that will have you dreaming of cocktails on the beach and falling asleep in a hammock. As you might well guess from the room’s name, this has a beach theme to it, complete with palm trees, blue sky and inviting looking sea. If you aren’t planning on going on holiday any time soon then you might want to steer clear of this room for fear of it persuading you to head to the travel agent!

The way the the balls are drawn is unique. The numbers are all ‘hidden’ inside coconuts and each time a coconut falls from the palm trees, which adorn the background of the game, they land on a rock and split open. The ball then ‘bounces out’ and lines up on the beach, with the ball that was called the longest time ago disappearing to make way for it. Compared to some of the other, more plain games that you can find online it’s actually a novel and interesting way of doing it.

This 50 ball game is played in the usual manner, with the number of tickets present on the screen at any one time being one of the standout differences. There are three column with six tickets in each column, meaning that up to eighteen tickets can be displayed for you to monitor your progress.

Because this is a 50 ball game there is no prize for two lines. Instead you’ll be keeping your eye out firstly for a line and then for a House. Hit one of them and you’ll win yourself the prize for that game. Do bear in mind that if someone else also gets a line or a House then they’ll share the prize for it with you.

Interestingly there is no over-riding feature that appears across all of the games on Coconut Island. Instead different games come around in rotation that have their own features. One of those is the Golden Sands 2toGo game, for example. As the name suggests, this game has a sidepot, if you will, which anyone who misses out on the jackpot but finishes the game with 2 balls to go can get a share of. It’s normally not a huge amount of money because the chances are you’ll end up sharing it with quite a few people, but it’s still better than nothing and takes the edge off coming so close but missing out.

There are similar games that have pretty much the same rules except they give you a slice of a pot for finishing with 1toGo. This is often a touch more money than the 2toGo pot, though again that largely depends on how many people are taking a share of it. One thing that’s worth bearing in mind is that you only get a piece of this side prize if you finish with 1toGo or 2toGo whilst waiting for House to be called. If you have 1toGo when looking for a line then, sadly, you’re just missing out with nothing to take the sting out of the disappointment.

There are two different jackpots on Coconut Island. The first is a progressive jackpot known as the Treasure Chest, whilst the other is a set one called Oyster Jackpot. They are both won in pretty much the same way; if you get House within a given number of calls then you’ll win the jackpot. The only difference between the two is the amount of calls you need to get House within in order to scoop the prize.

Say, for example, that Treasure Chest is fifteen calls and Oyster Jackpot is eighteen, in that instance you will win the progressive jackpot if you manage to hit House in fifteen calls or less. If, however, you get House after sixteen, seventeen or eighteen calls then you’ll win the smaller, constant jackpot.