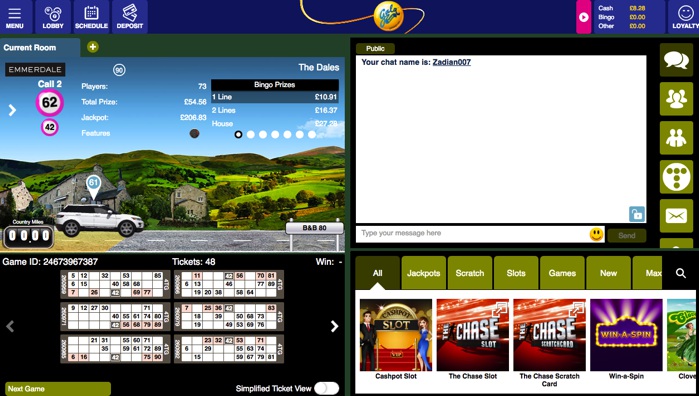 One of Gala Bingo’s exclusive games has a theme that will interest and amuse any television lovers out there. The Emmerdale Bingo game is based on the much-loved TV show and even has calls that are linked to the show; the 90 ball game has calls like ‘Tom King’s up in heaven, 57’, for example, or ‘Hurricane damaged tree, 63’.

As well as the humorous bingo calls, the entire set up is very much themed after the ITV show. When you first start it up you’re greeted with a large Emmerdale sign, then when the game is ready to go you’ll see a LandRover on a road with rolling green hills in the background. That’s not just there for the fun of it, however – it’s a part of how the game’s feature works.

In spite of its fun, Emmerdale themed layout the ticket layout is actually surprisingly boring when compared to other big games. Located underneath the screen where you’ll see the game action take place, the tickets are plain and laid out in rows and columns of six. This is something of a straight bat 90 ball game, so you’re after lines and then a house.

As mentioned above, this is a straight 90 ball game so it goes with a pretty classic formula of paying out to anyone who gets 1 line, followed by 2 lines and finally for the House. Much like with the vast majority of games, if more than one person gets the line, 2 lines or house then the jackpot for that will be split between all winners.

There are two main features of the Emmerdale Bingo Room; the Emmerdale Trail and Country Miles. The Emmerdale Trail works by having jackpots spaced out on the 20th, 40th, 60th, 80th and 90th spot on the road through the village. Every time House is called the number of the ball that it was called out counts for a spot on the road. So if House is called on 14, for example, then your LandRover will drive forward 14 spaces. If House is called on a number that means that your car stops exactly in one of the five locations just mentioned then you will win the corresponding jackpot.

Because people enter the room and start playing at different times they will not all be at the same place on the road. If, however, you happen to land on one of the five allotted points at the same time as someone else playing the game then you’ll share that jackpot with them. If you stop just before or just after the the 20th, 40th, 60th, 80th or 90th point and no one else lands exactly on it either then the jackpot keeps building. Once the car has ‘driven’ past 90 it goes back to the start and the whole thing begins again.

The Country Miles bonus is essentially a reward for loyalty play. You get miles for driving along the Emmerdale Trail, with each step out of the 90 counting as 0.011 miles. Collect 50 miles and you’ll be given a Bonus prize redeemable within the game.

The ‘drive’ through the village is mildly entertaining if you’re an Emmerdale fan. The 20th stop is The Woolpack, the 40th is Café Main Street, the 60th is The Grange B&B, the 80th is The Vets and the 90th is the Dingles’ Garage. That doesn’t alter what you can win, it’s just useful trivia if you find yourself wondering what the names are for.

Unlike some other games, the Emmerdale Bingo Room does not have an over-riding jackpot that is won by hitting certain targets. The jackpots are won within the game and by landing on certain spots on the Emmerdale Trail, as mentioned.