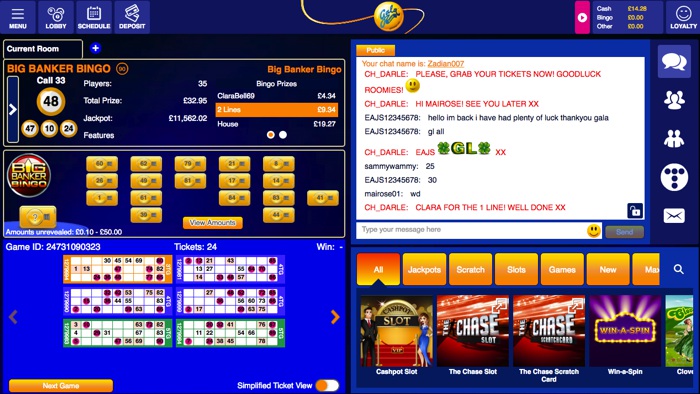 Big Banker Bingo is another one of those Gala Exclusive games. It’s something of a Deal or No Deal hybrid, as far as its feature game goes. We’ll explain that in more detail, but sufficed to say it’s a case of having a go if you’re brave or settling if you’re not. Despite this game having an interesting feature to it, the branding is actually rather plain. Oranges and blues are the colour theme, with the balls appearing at the top of the screen and the last three balls appearing underneath and being refreshed with each new draw.

The Big Banker Bingo caller doesn’t mess about with clever names for the numbers, either. You’ll get a straight-bat as far as those are concerned, with just the number and no rhyme or other linked theme thrown in there. Likewise the tickets are plain and sit on a royal blue background, offering none of the bells or whistles you might find on other games. None of that matters, though, as the feature is the main attraction of this game aside from the regular bingo play.

This 90 ball game requires the usual line-based patterns to be completed in order to find a winner. The tickets are arranged in two columns with three in each column, meaning that you’ll be able to see six tickets at any one time. The tickets themselves don’t have any sort of theme to them, presenting you with a standard look of boxes filled with a mix of numbers and empty spaces.

The main game has three normal prizes and a feature prize that are there to be won every time. As it’s a standard 90 ball game you’ll be looking for a line initially, then you’ll need two lines and finally you’ll be hoping to fill your ticket for House. The feature game we’ll obviously describe separately.

If you’ve ever watched Deal or No Deal then you’ll be familiar with the concept of the feature in the Bingo Banker Bingo room. Underneath the area where the balls are drawn are 22 different golden safes. Before the game a random amount of money is ‘placed’ into each safe and they’re all assigned a random number between 1 and 90. As the game goes on the safes are removed from them game. This happens when the ball that was assigned to the safe is drawn for the main game; if you’ve got your sound on then you’ll know this has happened because of a ‘kerching’ type noise.

One safe is separated from the others and is the ‘player’s safe’. As the game begins the 22 different amounts that are ‘inside’ the safes disappear in turn as the ball that represents their safe is drawn. Within the game box you can choose to either view the safes as they are opened or view the amounts on a board. At the conclusion of the game there will be some safes that haven’t been removed, meaning that one of the amounts on the board could be in the player’s safe that was put to one side at the start of play.

Let’s say, for example, that the remaining amounts on the board at the end of the game are as follows: £0.06, £0.34, £0.97, £1.10, £1.75, £2.10, £5.40. That means that one of those amounts will be inside the player’s safe. The player that won House will then be made an offer by the Big Banker, which will normally be somewhere between the lowest amount on the board and the highest. The House winner can choose to either accept or reject that offer, with other players in the room casting a vote as to what they think the House winner should do.

Once the player has made their decision they will either be given the amount that the Big Banker offered if they accepted it, or else their safe will be opened and they’ll receive the amount inside. Say that the Big Banker offered the House winner £1.10 and the player rejected it, they might then open their age and discover that they had the £0.06. Equally, however, they could open it and be rewarded with the £5.40. Fortune favours the brave, as they say.

There is a progressive jackpot in the Big Banker Bingo Bingo Room. It starts at £5000 and increases each time a game is played and the prize is not won. The prize is won when House is claimed within a certain number of calls. Say, for example, that the jackpot is won in 31 calls or under and you get House after 28 calls, the jackpot is won. Whoever won House gets 50% of the jackpot, whilst the rest is shared out between other players in the game depending on how many tickets they bought.