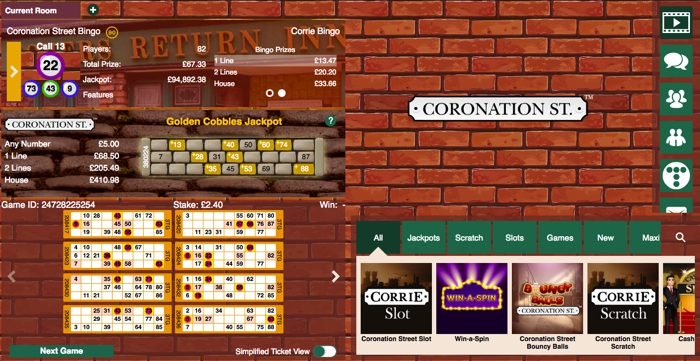 Being the online bingo giant that it is, it’s no surprise to see that Gala Bingo has numerous games that are exclusive to its network. Likewise it’s not a huge shock to see that some of those exclusive games have tie-ins to much-loved television shows, with Emmerdale and Coronation Street two of the most prominent. It’s the latter show’s bingo room that we’re talking about here, with many themes from the show present throughout this 90 ball game.

First of all there’s the bingo callers, whose voices Corrie fans will almost certainly recognise. It tends to be one of either Reg Holdsworth or Fred Elliot and it is the actual actors doing the reading, not soundalikes. There’s also a distinctly Coronation Street feel to the skin of the game, with bricks lining the back wall and the Rovers Return Inn sitting behind where the balls are drawn. You’ll also hear some Corrie references in the naming of the balls, such as Rita’s Den, Number 10 or Pork Pie Heaven, Number 57. It’s actually an odd choice, with the majority of the calls being entirely standard.

Interestingly Gala have decided to go with a rather boring traditional look to the tickets, despite how many different themes they could have given it if they’d wanted to. The tickets are plain looking and line up in two columns of four. You’re looking for the standard arrangement of numbers you’d find in any 90 ball game.

As mentioned, it’s the standard formation of patterns that you’ll be hoping for in the Coronation Street room. You’ll start by trying to find a single line, then you’ll progress to aiming for two lines and finally you’ll be hoping for a House. There’s also an additional way to win a prize, which is the main feature of the room.

The main feature of the room is the Golden Cobbles Jackpot and, being honest, it’s a little complicated to understand to begin with. There is special bingo ticket in-between where the balls are called and where your tickets are located. It looks, as the name suggests, like a series of cobbles, with some of the bricks having a number on them much like a bingo ticket would normally.

Every time House is called in the normal game the corresponding number that resulted in House will be marked off on the Golden Cobbles Jackpot ticket – should it be on there. If it’s not on there then, obviously, nothing happens. Equally, if it’s already been marked off, which results in it being turned golden, then nothing further happens.

The way this results in you winning a prize is if the marking off in the ticket causes something to happen to it, much as with a normal game. So, if you call House when the number 43 is drawn and 43 is an unmarked number on the Golden Cobbles Jackpot ticket then it will turn gold. If by turning gold you complete a line then you’ll win the corresponding prize.

Obviously the prizes increase, so if you complete 2 lines then you’ll win a larger prize and if it results in House being called on the Golden Cobbles Jackpot ticket then you’ll win the biggest prize of the lot. The final way you can win a prize via this method is if it turns golden but doesn’t complete anything, when you’ll win a small prize such as £5.