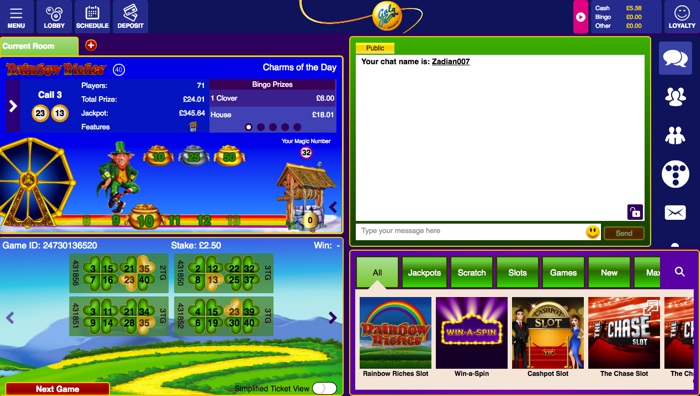 The Rainbow Riches Bingo Room is a popular game that you may well have come across before. There is a distinctly Irish theme to things in this room and there’s a lot going on, so whatever else happens you won’t be bored whilst you’re playing. From the leprechaun who dances along the rainbow through to the ‘Irish’ voice doing the bingo calls, the Emerald Isle has never felt closer than when you’re in here playing Rainbow Riches.

The balls are ‘drawn’ from a ferris wheel type device, which stands towards the top of the screen next to a leprechaun on rainbow. We’ll come back to him in a minute, as both he and the rainbow are part of this game’s added feature. Another thing we’ll talk about in more detail in the feature section is the wishing well that stands to the right of the other graphics. Your tickets stand below them all, in front of a meadow with a yellow brick road disappearing off into the distance. As mentioned, there’s a lot going on…

This is a 40 ball game, so ordinarily you’d be after 1 line followed by House. Things are a little different in the Rainbow Riches room, however, so the Irish theme comes into play. Your tickets are lined up in two columns of two and they have two clovers on each. You’ll win the first prize by getting 1 full clover, with the House equivalent being two full clovers.

In the main game there are two different prizes to be won. If you’ve read the above section then you’ll already know what we’re going to say here. The first prize requires you to get all of the numbers on one of your clovers, whilst the main prize needs to see both clovers filled.

Another feature that appears in some games is the 1toGo feature. If you have drawn sufficient numbers to require just one more to complete both your clovers on your tickets but someone else does so before you then you’ll get a share of a pot of money. How much you’ll get depends entirely on how many other people finish the game with just 1 ball to go. In many ways, that’s the same as the other games in the Rainbow Riches room as you will share the various jackpots with whoever wins them.

The jackpot within the Rainbow Riches Room involves that leprechaun on the rainbow that we mentioned before. When games are played, as well as balls being drawn there are occasionally Rainbow Clovers that might also come out. Every time a Rainbow Clover is drawn the leprechaun takes a step further along the rainbow, with a maximum of two Rainbow Clovers coming out per game.