Bingo is a versatile game, filled with different options depending on what it is that you’re hoping to do with your time. From the most popular game, 90 ball bingo, right down to 40 ball bingo and various specials, there are any number of games to capture people’s interest. We’ve been guiding you through how they all work, so if you’re interested in one in particular then be sure to follow the links to the specific game you’re after. Here we’ll talk you through how 50 ball bingo works…

Obviously if you’re hoping to win then you’ll need to have a ticket. In 50 ball bingo tickets feature five columns with two squares in each column. That allows for ten squares overall, which are filled with randomly assigned numbers. Unlike 90 ball bingo, where some of the squares a blank, every square in 50 ball bingo has a number attached to it.

The majority of games will allow you to buy one ticket for a game, so if you’re new to online bingo then that’s a good way to start in order to be introduced to how it all works. People tend to buy strips of tickets, which are made up of five individual tickets. How many strips you can buy will vary from game to game, but if you buy a strip then you’ll find that it contains every number possible between 1 and 50. For the purposes of ease of marking, the first column will contain numbers 1 to 10, then the next column will have 11 to 20 and so on.

Why do tickets have numbers on them? Because the game of 50 ball bingo works by 50 balls being assigned a number between 1 and 50, with all numbers used on the balls. These balls are then ‘drawn’ at random and each time one of them comes out you can mark that number off on your ticket. How prizes are won is what we’ll what discuss in the next section.

In other games there are a number of different ways to win. 90 ball bingo, for example, rewards players that get 1 line, followed by 2 lines and then House. If you play 75 ball bingo you might find variations on the game such as columns being rewarded with a prize, or 5 lines. 75 ball bingo also has ‘pattern’ play, where you need to mark a specific pattern off on your ticket.

Sufficed to say, 50 ball bingo is a lot more strict with its prizes. The smaller amount of numbers on the tickets combined with its simple layout means that there’s not much leeway for doing things such as patterns in this game. Instead you’ll find that it’s fast and furious, with the first prize being awarded to the first player to get 1 line marked off, then the second prize goes to the first player to fill his ticket. A completed ticket is also known as House or Bingo. As with virtually all bingo games, you’ll share the prize if more than one person gets 1 Line or House at the same time as you. 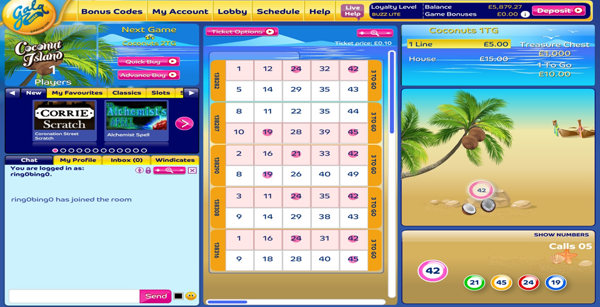 Some of the bigger games on the Gala network have what are known as Features attached to them. These are additional things outside of the normal bingo game that allow people to win some extra money. Normally, though not exclusively, they are games for the winner of the House call to play after the bingo itself has been completed.

Because 50 ball bingo is a much smaller affair, there don’t tend to be the same sort of Features included in the play as you’d find with the bigger games. This is mostly because the smaller games tend to be fast and furious, so players want to get onto the next game as soon as possible.

Instead of Features allowing you to win extra money, what often happens in smaller games such as 50 ball bingo is that there will be individual versions of the game that have added bonuses such as 1ToGo or 2ToGo. These games allow you to win a share of a pot when House is won and you have a ticket with 1 or 2 balls still to go to complete it. The pot will be shared out between any players that have 1 or 2 to go on their tickets.

When it comes to jackpots, these are triggered in very specific ways. Say, for example, that the jackpot will be awarded if House is won after 15 calls, you will win a share of the jackpot if you manage to get all of the numbers marked off on your ticket within 15 ball draws or less. Oftentimes the smaller games have two jackpots; one after something like 15 calls and another after, say, 18.

At the time of writing there is only one strict 50 ball bingo game  which is the popular Coconut Island. There is a 49 ball game, interestingly enough, which is Bingo Lotto. This game is based on a lottery style game, so you win prizes for getting three numbers, then four, then five and finally six. The jackpot is a progressive one, which is won by getting all six numbers on your ticket marked off after the drawing of the first 6 balls.