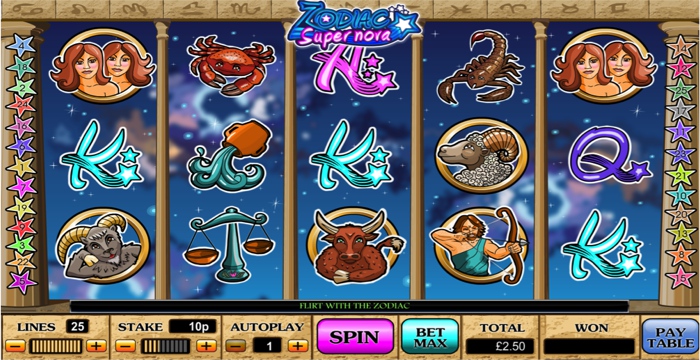 There’s only really one special feature in play during Zodiac Supernova, so we’ll explain it to you here to make sure that you know what you’re doing when you press the ‘Spin’ button:

There are no Wild symbols in Zodiac Supernova, nor are there any major mini-games that you can end up playing as the game goes on. Instead there’s an Exploding Reels Feature that is quite fun to witness and can see you earn more winnings than you were expecting. The best thing about this is that you don’t even need to do anything, with the game taking care of everything for you.

If you get a winning line then the symbols will ‘explode’ after your winnings have been counted. All symbols then shift down to replace them, with new symbols coming in from the top to replace the ones that have moved. If a new line is formed then they’ll also disappear and this will keep going until there are no winning lines formed.

It’s probably best to talk about the Return To Player average first. It sits at 95%, which means that it’s in the bracket of being decent without being overly exceptional. If you’re wondering what we look for in a game to tip the balance towards the exceptional then it’s an RTP of closer to 98%. Most Virtue Fusion games come in at around 94%, meaning that this is a little bit better than a good number of games that you’ll end up playing if you spend long enough checking out the various options. Should a game’s Return To Player average dictate whether you play it or not? The answer to that depends entirely on personal preference, with some of you feeling that the amount of money that you get back on your initial stake trumps the playability of the game. Others will prefer a game that is genuinely fun to play, given that most slot games will send a few wins your way to keep you interested. The natural next question, of course, is whether or not the game is any fun to play…

There is some more debate to be had over what makes a game fun and interesting. There are a large number of options on the Virtue Fusion network that will take you a good while to master, with countless special features and themes that are linked to films or TV shows. The Little Britain slot, for example, has special features that are linked to some of the characters from the TV show, complete with videos that play when you hit a winning line. Other games are short and sweet, designed only to keep you amused for a few minutes as you wait for a new bingo room to open or take a break from the tumbling of the balls. Is it fair to compare the two different types of game? After all, the short and sweet games aren’t trying to grab your attention for the long-term in the same way that the more in-depth games are, so should they be judged the same? Zodiac Supernova definitely fits into the latter bracket, boasting no interesting mini-games or features bar the Exploding Reels one. That means that the gameplay is a little uninspiring, even if the reels spin smoothly and land without any major issues. The simple fact is that Zodiac Supernova is just a bit ‘meh’. Exploding reels are all well and good, but if you don’t get a winning line then you never see the feature in action anyway.

Given the theme of the game, wouldn’t it have been a bit more fun to add in a bonus round where you have to select a sign of the zodiac and get your horoscope read to you, with different prizes associated with different signs? Of course, we’ve just pointed out that this is only a short game, so maybe this is a little unfair. Speaking of the theme, it is really well done. The reels are located within a Greek-style arch, complete with the symbols of the zodiac scribbled across the top. The line numbers are located within stars along both side of said reels, with the entire look of the game only let down by the fact that there’s no theming to the ‘Spin’, ‘Pay Table’ and other buttons that you’ll find along the bottom. As you’d expect from a game with such a theme, the symbols are all made up of the various signs of the zodiac. You’ll find the likes of Gemini, Taurus, Scorpio, and so on. They have done well to keep the theme going even with the Q, K and A symbols, which all have stars coming out of them. At the end of the day, the theme might be well done but it isn’t really good enough to rescue an otherwise fairly average game. You’ll play it, but you’ll likely move on pretty quickly. Then again, isn’t that exactly what the designers want you to do?