Do you like comics? Do you enjoy Thor? If so you’ll probably love this game. If not then read on to find out whether there’s anything about it that’s likely to appeal. 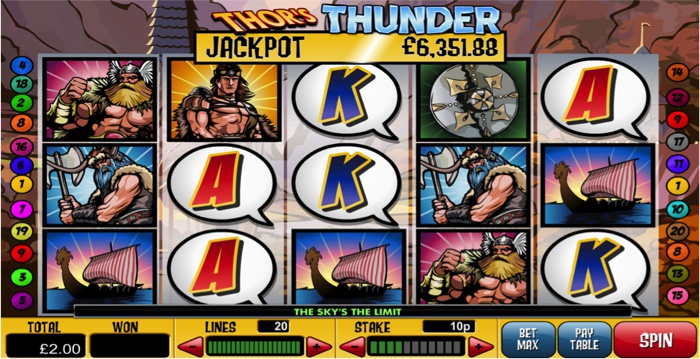 Thor’s Thunder has two main special features in addition to its progressive jackpot. Here’s an explanation of how they work.

Not everyone knows that Thor’s Hammer is called Mjolnir, but now you do. If you see Mjolnir landing on the first reel then you’ll be entering in to a bonus round based around the notion of Thor’s Hammer smashing through some shields. You’ll be presented with three to choose from and the one you select with find Mjolnir hurtling towards it. Once hammer connects to shield your win multiplier will be revealed, with your prize being that combined with the stake you’ve played per line and the number of lines that go through the winning symbol on the game.

The fact that Lightning symbols become Wild isn’t the only reason you’ll want to see them. If you get five of them on an in-play line then you’ll win at least some of the progressive jackpot. How much of it you’ll win depends on your stake amount per line, with 1p earning you 0.2% of the overall prize. The winning amount them gets gradually larger, all the way up to 100% for a £5 stake per line. In other words, play big if you want to win big.

Thor’s Hammer is deliberately designed to look like a comic strip, presumably in response to the popularity of films based on things such as the Marvel Universe that have taken the cinema by storm in recent years. The welcome screen tells you everything you need to know about what to expect, with a series of characters stood looking menacing whilst a large lightning bolt strikes behind them. The game itself plays out in front of a of what looks like a rocky area that is perhaps supposed to be Asgard. There can be no real complaints about the theme, given that the comic trip nature of everything is plain to see in every aspect of the slot. The line numbers are located within what look like comic bubbles, whilst the ‘Spin’ button and information section where you can see how much you’re staking and how many lines you’re playing are all written in a comic font.

The fact that there are a couple of special features to capture your attention also works in the game’s favour. Admittedly neither of them are overly clever or imaginative, but it’s only really designed to be a quick game rather than a particularly immersive one. The symbols are made up of Loki, Balder and Thor himself, as well as a shield and a Norse ship. The reels don’t spin all that smoothly, probably owing to the fact that there hasn’t been a huge amount of time or effort given over to the graphics. The game is purposely designed to be a bit kitsch, with Virtue Fusion using the excuse of the comic strip look to allow them to not have to pay all that much attention to how it looks or feels. If you’re a fan of Marvel or the like then this will probably tick all of your boxes in terms of the general play.

The Return To Player average of 93% isn’t the most fantastic that you’re going to find on a slot game, but it’s only just shy of the ever-more standard 94%. If you’re hoping for one of the best payouts then you’ll have to shop around for one with an RTP closer to 98%, but they’re becoming harder to find. An RTP isn’t the only reason to play a game, so you’re better off thinking about the gameplay unless money is the only thing that matters to you. Thor’s Thunder is perfectly decent on that front, but be aware that it just isn’t meant to be much more than a mildly distracting game to take you away from a bingo room for a few minutes. You’re not going to be rushing to play this again and again, unlike a more immersive option such as The Glass Slipper or Monty Python’s The Life of Brian, both of which have much more in their arsenal.