The tarot theme of this game is quite fun, but there’s a fair bit to it besides. Read our in-depth review to get a sense of whether or not Tarot Fortune is a game you fancy playing. 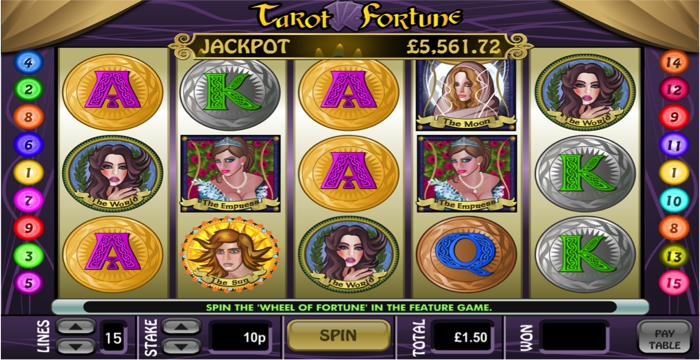 The progressive jackpot isn’t the only thing with Tarot Fortune that is likely to catch your attention, so we’ll talk you through the game’s special features in this section of our review:

Wheel of Fortune Bonus Round

If you’ve ever seen an American game show or played on a roulette table then you’ll understand the principle behind the Wheel of Fortune bonus round. You’ll start this game if a Wheel of Fortune symbol lands on the first reel of any of your enabled lines. The Wheel will arrive on screen and you’ll be asked to start is spinning by pressing ‘Spin’ and stop it by pressing ‘Stop’. If you don’t do anything then it will begin to spin automatically after a given amount of time. You’ll then be paid a prize that is made up of your original stake multiplied by the number the Wheel of Fortune has landed on.

The Sun might be an appalling tabloid that should be avoided in the United Kingdom, but in Tarot Fortune it’s the symbol you’ll most want to see land on your reel. To be more specific, you’ll want to see five of The Sun symbols land on the same line as that means you’ll have triggered the progressive jackpot of the game. As with most progressive jackpots, how much of it you’ll win will depend entirely on the size of the stake on the winning line. If you opt for the minimum line stake of 10p then you’ll receive 10% of the jackpot, whilst the maximum of £1 per line will see you winning 100% of it.

Tarot Fortune is a decent enough game and there can’t really be any complaints about the theme being inconsistent, even if it could’ve been used better. From the moment you see the loading screen it’s clear what it’s all about, with several different tarot characters writ large for you to see. Head into the game itself and the idea continues, with the reels sitting in front of an ‘open curtain’ that lets you inside the tarot reader’s tent. They could have done something a little bit more interesting with the line numbers down the side, given that they simply sit inside coloured ovals at present. Likewise you feel as though the ‘Spin’, ‘Stake’ and ‘Lines’ buttons could have been a little bit more interesting considering what they’ve got to play with when you think of a theme like tarot reading.

That same criticism continues when it comes to the special features of Tarot Fortune. The Wheel of Fortune bonus game is quite fun, but a wheel that spins before landing on a number is fairly generic. Was there nothing to be done around the idea of a fortune teller turning over cards, with different ones linked to different prizes? That would have allowed for a degree more interactivity too, which many players enjoy. The fact that the number of Free Spins is dictated by collecting tarot cards of the same character suggests that the thought at least crossed the makers’s mind when putting the game together. That said, the various symbols are made up of The Empress, who looks a bit like a busty Princess Dianna, The Moon, The World and the aforementioned Magician. There’s also a flickering candle effect at the top that works well.

Away from how the game looks, it works smoothly when you spin the reels and they land by dropping a touch and then popping back up. It has an average Return To Player amount of 93%, which is a just below where we’d ideally like it to be. The best games boast an RTP of around 98%, but even half-decent ones at least creep as high as 94-95%. You shouldn’t base whether you want to play a game on its RTP alone, mainly because ones with really good return averages can still be boring and repetitive to play. That said, if you’re the sort of person that tends to ignore Return To Player averages and focus solely on gameplay then it’s unlikely that Tarot Fortune will win you over on that front either. It’s not a bad game to play, it just feels as though they could have done so much more with it if they’d been more streetwise with how they used the theme when designing it.