Stampede might initially seem like a game that is designed to be played quickly and then forgotten about, but it’s got a couple of tricks up its sleeve to encourage you to come back for more. If you’re wondering what we’re going on about, read our in-depth review of the game to find out more. 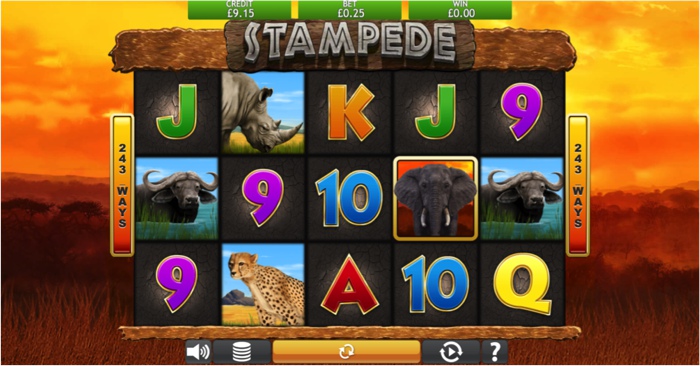 Stampede boasts a couple of interesting special features that stops it from being just a run of the mill slot without much more to it than the spinning of the reels. Have a read of how each of the features works here so that you know what you’re looking out for when you play the game:

The bright savannah Sun acts as a Wild during your playing of Stampede, meaning that you’ll be presented with the opportunity to create a winning line when there wasn’t one there before. It can sub in for any symbol apart from the Elephant Scatter, presenting you with chances to make hay whilst the Sun shines. Do be aware that the Sun Wild can only appear on reels two, three and four.

Several Elephant Scatters can be winners all on their own, but you’ll be most pleased to see three or more of them appear on your reels as it will mean that you’ll kickstarting the Free Spin Feature. This is a little bit different from normal Free Spin opportunities that you might have come across in the past, however, thanks to the ability to customise how the games play out. You can do that by deciding whether you’d like more Free Spins with lower Multipliers or fewer Free Spins with higher Multipliers.

After you’ve seen three or more Elephant Scatters land on your reels you’ll be asked to make a choice about which Free Spins game you’d like to play. You can choose from the following:

This really comes down to personal choice: do you want to get loads of games but maybe not win quite as much money, or are you happy to play fewer games with the potential reward being higher payouts? The problem with the latter selection is that you might not win at all during the Free Spins feature, meaning that it doesn’t matter how big the Multiplier is as ten times zero is still zero.

It’s possible that the Free Spins Feature will be triggered again during your Free Spins. If this happens then you’ll notice a counter appear over the top left of the reels, indicating how many times you’ve won Free Spins. This is because you can play the Free Spins Feature up to fifteen times in succession, so the counter will let you know where you’re at on that run. Over the top right of the reels you’ll see what the Multiplier is that you’re playing with. The games will be played with the initial stake that you were playing with when the feature was triggered.

Stampede is one of a new breed of games that is perfectly fine without being particularly thrilling. We’ll explain that more as we go on, but for starters let’s talk specifically about the theme. It’s worth noting that the game looks beautiful when you first load it up, thanks to the fact that the reels sit in front of what appears to be a glorious African vista. The sun is just setting, lending the sky a golden orange haze to its appearance, with trees and grasses in the front giving the entire thing a decent amount of depth. The reels seem to be suspended from two pieces of wood, as though the whole thing has been made by a workman who happened to be wandering through the desert. The theme extends well into the symbols that are in play, with Bison found alongside Rhinos, Lions and Leopards. If you wanted to be nit-picky then you might suggest that they could’ve done something more with the 9, 10, J, Q, K and A symbols, which are differently coloured numbers and letters sitting on top of what looks like some dried out parchment.

The name of the game appears above the reels in a font that is reminiscent of the one used in the Jurassic Park movies, weirdly enough. The main difference appears to be that this font is grey rather than yellow and red. When you move away form the look of the slot, the gameplay is the next thing that you think about. On that front Stampede is just fine without being particularly spectacular. Don’t misunderstand us, the reels spin nice and smoothly and the graphics are more than capable of making the game visually impressive. It’s just that it feels like it likes a bit of character and is quite ‘corporate’ in the way that it plays. The fact that you can choose the way to play the Free Spins Feature is a nice touch, but it’s a little bit disappointing that that’s the only mini-game you can play. Yes, having the Sun Wilds to change potentially losing lines into winning ones is good, but it’s not as though that’s a game in and of itself that’s going to keep you busy for a while.

Ultimately of course, this isn’t designed as a game that is supposed to have loads of levels and keep you playing it for hours. It’s intended as a mild distraction, offering enough to keep you busy for a few minutes in between bingo games or whilst you’re waiting for a room to open, so on that front it does it’s job. Yet is that enough to encourage people to play it? Probably not, to be honest, and the Return To Player average isn’t going to have you rushing along either. Again, 95.2% is actually quite good and so it’s not that it’s rubbish. It’s just that it’s not quite high enough to mean that you’ll think ‘I should definitely play Stampede’. If it was closer to 98% then we’d be willing to overlook the lack of particular exciting special features, but given that it’s only a shade above the more common 94% we’re not sure that the gameplay rescues it. There are unquestionably better slots on the Virtue Fusion network that will either see you more engrossed in the gameplay or see more money head your way on average, sometimes both. That means Stampede is in the ‘play it once but don’t rush back’ pile.