There are many variables that go into making a game either good or not quite so interesting. Read our in-depth review on the Snow Queen’s Magic slot to decide if it sounds like a game that you’re going to enjoy. 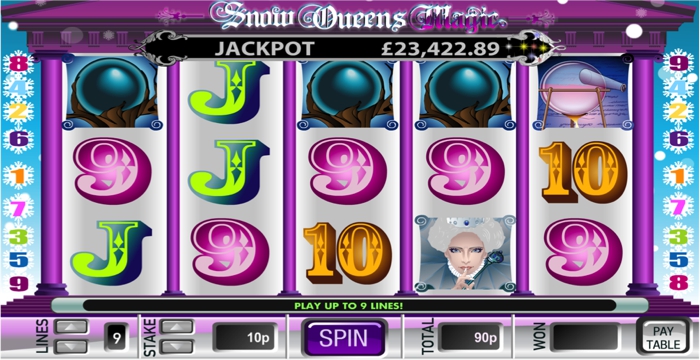 The lack of any sort of special feature in this game is a little disappointing, but at least there’s a progressive jackpot for you to play for. You’ll trigger it by landing five Snow Queen symbols on an active line, with the amount of the jackpot that you’ll win dictated by the size of your stake on the winning line.

If you’ve opted for a £5 stake per line, which is the game’s maximum, then you’ll win 100% of the jackpot. The amount will then become gradually less all the way down to 2% for the progressive jackpot available for a 10p stake per line.

A Return To Player average of 94% means that this game finds itself squarely in the ‘decent enough’ bracket, meaning that a relatively small outlay will likely allow you to play for a solid amount of time in order to get to grips with how the game works. There’s no question that there are better RTPs out there, however, so whether this is good enough for you will be a matter of personal choice. Some people like the possibility of winning more money more often, whilst others prefer a game with decent gameplay. In terms of Snow Queen’s Magic, both of these factors are ok and not exceptional, so it would be unlikely that you’d let one of them dictate whether or not you wanted to engage with it as a slot.

What might persuade you to learn one way or another is the overall look and theme of the game. In that sense it actually feels and appears much richer than its lack of special features would initially have you believe. From the moment that you open the game up and the Snow Queen appears in front of you on the welcome screen, the theme works perfectly well. The colours are rich and vibrant, with a royal purple being the chosen look of the ‘palace’ that the reels are housed in. The line numbers can be found inside some snowflakes and the rest of the colour scheme is made up of blues and silvers. The symbols are also interesting, with the Snow Queen herself joined by what looks like a Magic Orb, a Wise Owl, a Stallion, a Wizard and more.

As for the gameplay, it’s surprisingly smooth. It feels as though this is quite a new member of the canon, with the reels spinning much more smoothly than that do in some of the older games. There’s no sense of blurriness, with the graphics instead allowing each reel to spin as though in real life and they land nice and neatly. The lack of any sort of special feature will always disappoint, even if the presence of a progressive jackpot does allow you to dream of winning big. This is never going to be a game that you return to again and again but, in fairness, it’s not designed to be. It’s the definition of the sort of game that is supposed to provide a temporary distraction and in that sense it succeeds. It’s actually even better than similarly small games, thanks to the improved graphics and the smooth gameplay.