If you’re a fan of the Indiana Jones series of films then you’ll enjoy this slot, which is not-so-subtly based around them. Read our in-depth review to get an idea of what exactly we’re talking about. 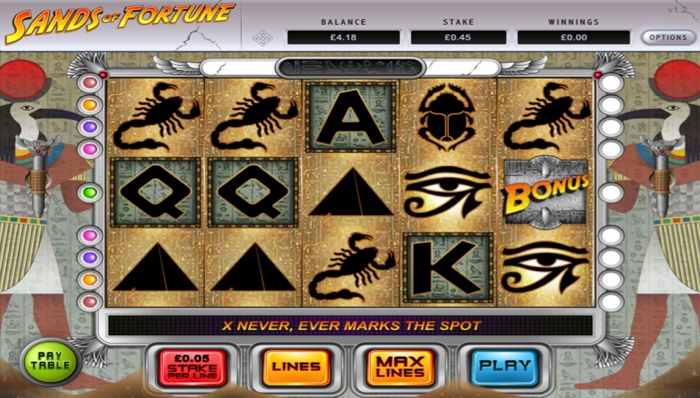 There are a couple of special features available during your playing of Sands of Fortune. Here’s a look at each of them and what you need to know:

Remember when Indy had to run away from that big rock that looked as if it was about to crush him? Well, in Sands of Fortune that’s a little bit like what the Wild symbol looks like. It can substitute in for any symbol apart from the Bonus Scatter, which is nice because it means that a spin of the reels that appeared not to throw up any winners may actually do just that if there’s a Wild involved.

The presence of Wilds doesn’t do much to separate Sands of Fortune from the majority of other games out there in slot world, but not all of the ones that have Wilds also have a Bonus Game. Sands of Fortune definitely does and it’s a game that works well as far as the theme of the slot is concerned. If you land three or more Bonus Scatters then you’ll be transported to a different screen and told that you’re about to begin your journey.

The ‘journey’ involves being presented with three different doorways and needing to select one of them to see if there’s a prize down that passageway. If there’s a prize then it will be added to your total winnings for the period of the Bonus Game. You’ll then get a chance to pick another doorway and see if that too holds a prize behind it. If it does then the journey goes on and on, continuing until the point when you find a trap and the mini-game comes to an end and the main game continues.

There’s plenty about Sands of Fortune that most players will really enjoy. We’ll start by talking about the Return To Player average, however, which very few players will enjoy all that much. It’s 93.7%, which is quite a bit disappointing to be honest. The majority of the lesser paying games have an RTP average of at least 94%, with the very best games going as high as 98%. That leaves Sands of Fortune well off the pace, which means it better have an awesome gameplay if it wants to be competitive against those more generous slots on the market. Of course, not everyone believes that a game’s RTP average is the most important thing. You can play a boring game with a brilliant Return To Player amount, just as you can play a really exciting game with a poor RTP. Which side of that particular argument you come down on will dictate pretty clearly what you think of Sands of Fortune, given that we already know about the RTP average. What can we discern from the gameplay involved in this Egyptian themed game?

Let’s begin by talking about that theme, AKA Indian Jones Wannabe And The Kingdom Of The Egyptian Slot. It’s actually really well done, from the Indiana Jones font that adorns all of the important titles and symbols, such as the Bonus Scatter and Wilds, through to the little dung beetle that creeps across your screen and will briefly convince you that there’s something on your computer. There are Horus-type statues of Egyptian bird-headed men standing to the side of the reels, which appear to be on papyrus. There’s plenty of other Egyptian touches, such as the symbology that surrounds the reels, but they didn’t expand it enough to include the line numbers, which are just written out in differently coloured words on the side, nor to the buttons on the bottom of the screen. Whether you’re talking about the ‘Spin’, ‘Lines’ or ‘Pay Table’ buttons, they’re fairly standard and designed to look as though they’re on a physical slot machine like the ones you’d find in a pub. The symbols on the reels follow the rules of the theme, with Beetles, Scorpions and Pyramids seemingly burnt onto the papyrus background.

Moving away from the theme, the gameplay is quite exciting in its own way. The reels have a random timer on them that means you’re never sure when they’re going to land. It adds a slight thrill to the whole experience, never knowing when the game is going to come to its conclusion. The addition of Wilds adds a bit of interest, too, whilst the Bonus Game takes the entire experience to another level. It’s a decent mini-game to chuck in to the middle of an otherwise fairly middling experience, very much following the idea of the Indiana Jones-style theme that was taken up first by the rest of the slot. If you’ve got your sound on then you’ll hear a track playing that could easily be taken from one of the Harrison Ford fronted films, punctuated every now and again by the cracking of a whip. The gameplay will interest those of you that enjoy the films, but if you don’t you might think it’s all a little bit hackneyed. Regardless of whether you enjoy it or not, you’re not going to win much thanks to that mediocre Return To Player average. The reality is that this is a good game let down by its RTP, meaning that you’ll find many other games out there that will tick both boxes.