Slot games are complicated creations, filled with in-game features that differ between one game and the next. That’s why reading our in-depth review will put you in the best position to make an informed decision about whether or not Reel Gems is for you. 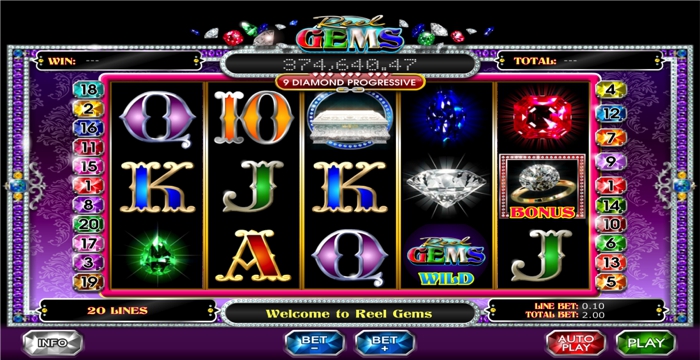 The first place to start is with the game’s special features, of which there are enough to entice you into playing and then keep going with it. Here’s a look at each of them:

It’s always great to see a Wild land on your active lines, knowing that it might change the symbols from losing ones into winners. In the case of Reel Gems, the Reel Gems Wild can substitute in for any symbol apart from Scatters and the Bonus symbols. Three or more of the Wild symbols on your line will be a payout of its own.

Diamonds are a girl’s best friend, as the old saying goes. Male or female, you’ll be delighted to see three Diamond Ring Scatters landing on your active play lines as it means that you’ll be able to play the Diamond Ring Scatter Winspin Bonus game. That might sound like a mouthful, but it’s actually not that complicated.

You’ll see three Winspin options in front of you that you’ll be able to choose from, with the reels spinning for the selected number of times. Each spin must, as the name suggests, be a win and if it isn’t the reels will spin again. Here’s how each selection will work:

The first option you’ll see is the possibility to enjoy five Winspins, with the final tally being multiplied by up to 10x. You’ll see an arrow and 2x, 5x and 10x written down, with the arrow shifting to the chosen amount to decide how much you’ll take home.

This works in the same way, with the major difference being that you’ll enjoy double the amount of spins. The counter to that is that you’ll get a maximum multiplier of 5x. The options in terms of possible multipliers will be 1x, 2x, 3x or 5x.

Last but not least is the option to take fifteen Winspins but with a maximum multiplier of 3x. That means the possibilities will be 1x, 2x or 3x. In the end which one of these you choose will boil down to whether you prefer to see loads of spins or bigger multipliers.

If three Jewellery Boxes land anywhere on your reels then you’ll be able to start playing the Jewellery Box bonus game. We say ‘start playing’, but there isn’t a lot you actually need to do. The three Jewellery Boxes will move into the centre of your screen and open up, with three gems emerging from each. If those gems are all the same in one box then you’ll win the prize that links to those gems and gems will continue to come out until they no longer match. As soon as the gems aren’t the same the box will close and no longer be part of the game.

As you might well expect from a game based around the idea of gems and diamonds, this game is very rich in its appearance and general play. Admittedly it is a little bit ‘nightclub in Blackpool’ in the way that it looks, including the synth-style music that accompanies the description of how all of the games work. Yet there’s no denying that it’s all quite fun, with a theme that is consistent throughout. Opals and other such precious stones can be found all around the reels, including the shapes and colours that dictate the line numbers. Even the ‘Play’, ‘Auto Play’, ‘Info’ and ‘Bet’ buttons take on the shape of a gem. Within the game itself the symbols all carry this on, with diamonds and other precious stones making up the numbers. The 10, J, Q, K and A symbols are also rich looking, lending the game a feel of being very much for those that like the finer things in life.

When it comes to the special features of the game, they’re rewarding without being particularly fun to play. That is to say, whether you land three Jewellery Boxes or three Diamond Rings, there’s nothing that you actually need to do to play the games. The computer takes care of everything for you so you just sit back and watch the winnings you’ll be able to collect increase. Whether that’s a good or a bad thing will depend entirely on how much you like to interact with the games that you play. If you’re all about the winnings then you’re unlikely to be all that bothered that you don’t need to press a few buttons to decide how much those winnings will be. Whereas if you’re the sort of person who enjoys the more interactive nature of certain games then it will be a disappointment to you that you don’t get to do that here.

Having said that, the fact that you’re allowed to choose between five spins with a multiplier of up to ten, ten spins with a multiplier of up to five or fifteen spins with a multiplier of up to three does add a bit of enjoyment to the whole experience. Some of you might like to win loads of times and aren’t too bothered about how much you’ll get, whilst others might think the amount you get is more important than the number of times you win. With a Return To Player average of 93.1% you’re unlikely to strike it rich all that often. That’s not to say that you should definitely go for the lower number of spins in the hope of hitting bigger payouts, of course. It’s just to point out that there are definitely games out there with better RTPs, if that’s the sort of thing that matters to you. If it’s not then you’ll likely enjoy Reel Gems more than enough and be able to find plenty about it to keep you coming back.