If you like things with an Irish theme then you’re likely to be a fan of Rainbow Riches, but to get more of an idea of what the game includes read our in-depth review. 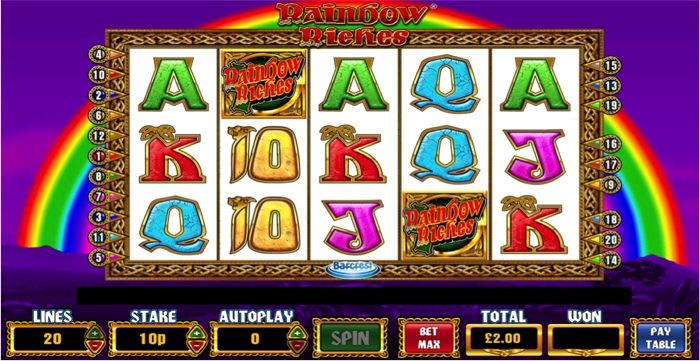 There a couple of special features involved in playing Rainbow Riches, with three of them involving amusing bonus games. Here’s a look at how it all works:

Wild symbols can change a losing line into a winning one, so keep your eyes peeled for the Golden Leprechaun Coin symbol as pictured here. Wilds can substitute any symbol with the exception of those that will kick-start a bonus round.

Three or more Green Leprechaun symbols landing anywhere you can see them on your reels will result in the Road to Riches game being triggered. Simply press start to spin the wheel, which will dictate how many steps along the Road to Riches you’ll be able to take. You’ll continue spinning the wheel until a ‘Continue’ symbol arrives or you get the end of the path. The prize you get will be represented by the size of your stake and the number of the initiating symbols.

Keep your eye on the middle three reels of the play area, hoping that three Pots of Gold land there. If they do you’ll initiate the Pots of Gold bonus game, which involves Bronze, Silver and Gold pots spinning around your screen. Eventually they’ll come to a stop and when they do an arrow will point to one of the pots. The pot will contain your prize, with the amount you win being determined by the initiating symbols and the size of your stake.

The more observant amongst you will have realised that there is no jackpot to speak of when it comes to playing the Rainbow Riches game. That is obviously disappointing for a lot of people, with the game instead opting to pay out victorious players via the spinning of the reels and the bonus games alone. The Return To Player average of 95% is quite decent when compared to the majority of the games that sit at about 94%, though it’s obviously not as high as the games that have an RTP of 98%. Whether or not the game appeals will depend on whether or not you’re the sort of person that focuses on something like a jackpot amount before deciding if a game is for you. If you’re obsessed with how much you can win rather than how often you can win something then we’d suggest Rainbow Riches isn’t really for you.

Plenty of people don’t care about either the RTP or any progressive jackpot that’s on offer, preferring instead to think about the gameplay and the theme that the slot entails. In terms of theme, Rainbow Riches looks and sounds exactly as you’d expect if you’re a fan of Irish stereotypes. When the game opens for the first time you’ll hear a diddly-dee type of pipe music that ticks all of the Irish cliche boxes. The reel is contained with a Celtic looking box, with the line numbers found within broaches of a similar design. The reel itself stands in front of a bright and shiny rainbow, which isn’t massively surprising when you think about the name of the game. The symbols themselves are found wanting, with only the Wild and a Rainbow Riches symbol worth mentioning.

The gameplay is quite good fun, especially if you manage to land one of the symbols that will see you enter into one of the bonus rounds. The Road to Riches is probably the most interesting of the three games, though the Pots of Gold option is good too. You won’t complain if you end up playing any of them, of course, given that it means you’ll be getting some added money heading your way. The lack of progressive jackpot does mean that the game is missing a really big moment of excitement, but in terms of actual play it’s perfectly fine. This is likely to be the sort of game that you engage with more because you like the RTP than anything else, even though it all works smoothly enough. It’s easy to see why this game is so popular, thanks to the clear theme and the fact that you’ve got a decent chance of winning a fair amount of money for a meagre investment.