Paradise Reels is a game that aims to take you away from it all, letting you imagine that you’re lying on a hammock sipping a cocktail. To find out whether or not it’s a game that appeals to you, read our in-depth review of it. 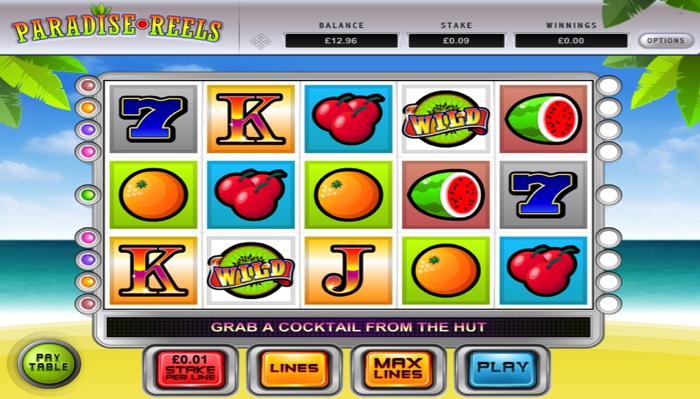 Paradise Reels has two interesting special features that help to keep it interesting. Here we’ll explain how they both work and what, if anything, you need to do trigger them:

The vast majority, of slot games, though certainly not all, have a Wild function. In that sense, Paradise Reels is no exception. What does help it to stand out from the crowd, however, is that the Wild can substitute in for any symbol, which is different to other games that specifically say that their Wilds can’t replace Bonus Scatters or the like. In Paradise Reels they can sub in for anything, so even if it seems like you’re not onto a winner don’t count your Kiwi Fruits until they’ve hatched. Or something.

The Coconut Bonus Round will be triggered if you land three or more Bonus Scatters on an active pay line. If you have several lines with three or more Bonus Scatters on then you’ll get the play the Coconut Bonus Round more than once, depending on how many lines have them. The game will take you to another screen, where you’ll see several coconuts lying on the beach.

The bonus game requires you to make a selection, choosing which coconuts you believe will feature matching amounts of prize money underneath them. Clicking on the coconut will turn it over, with the amount being revealed onto the beach. If you match three of the same amount then you will win that prize and the game will come to an end. Remember: a Kiwi Fruit Wild can act as a Bonus Scatter and if more than one line features three or more Bonus Scatters then you’ll get to play the Coconut Bonus Round more than once.

The first thing we should mention when we look at Paradise Reels is the fact that there are two different ways that you can play it. When you first load up the game you’ll be presented with two options: ‘Real Play’ and ‘Demo Play’. In terms of how the slot works there’s no difference between them at all, they’re exactly identical. The only difference comes in the fact that in the Real Play version you’ll be using your actual credit, whilst if you click on ‘Demo Play’ then none of your money will ever leave your account, though it will look as though it is going to. It means that you can have a play of it and see if it takes your fancy without actually investing any money in it, which is actually quite a nice feature. You’ll probably want to take them up on it, too, as the Return To Player average of Paradise Reels is 93.7%. That’s quite disappointing and certainly not enough to get you all that excited. Games with higher RTPs of around 98% usually give you enough of your stake back to mean that you can have a bit of a play from a relatively small stake. 93.7% isn’t good enough to allow you to do that, so use the Demo Play function instead.

If you do that you’ll find a game that is smack bang in the middle of the ‘mediocre’ category. Let’s begin exploring it by talking about the theme. The idea here is that you’re on an island paradise, far away from the stresses and worries of your every day life. The reels sit in front of a golden beach and a deep blue sea, complete with palm trees on either side of the screen. When it comes to the symbols, you’d be forgiven for thinking that you might see some things linked to a paradise island in some way. Perhaps a cocktail, for example, or a sun lounger. Instead of that there are some Cherries, an Orange and half a Watermelon. Added to that there’s the the Kiwi Fruit Wilds and the Bonus Scatters, though we were a little bit disappointed as far as the latter were concerned. You’d think that the fact that the Bonus Round triggered by landing the Bonus Scatters is all about coconuts that the symbol would actually feature a coconut, but it doesn’t. It’s literally just a square symbol with the word ‘Bonus’ written on it, which is a little underwhelming. Likewise the line numbers aren’t made up of anything ‘paradise’ like, instead just being circles of colour.

Of course, how good the theme of a game is doesn’t necessarily matter to everyone. Ultimately you might just want to know about how Paradise Reels actually plays and on that front you’re unlikely to be blown away. The graphics involved aren’t exactly the most futuristic ones we’ve seen, yet the slot seems to struggle to cope with them. The reels seem to take an age to spin, looking blurry enough to give you a bit of a headache if you watch them too closely as they turn. If you get a winning symbol it does something mildly fun, such as flash lightning or have spinning lines behind it, but it’s not as though it’s the most graphically taxing thing in the world. This game isn’t designed to be anything other than a quick bit of fun to play whilst you’re waiting for a bingo room to open or something, yet there are definitely better games out there that do exactly the same thing. The Kiwi Fruit Wilds add a mildly interesting aspect to the game, but it’s not as though it’s unique. The Coconut Bonus Round is a different way of playing a mini-game what you’ll find with other slots, but it’s still not exciting enough to mean that you come back craving to play it time and again. When all is said and done, there’s nothing wrong with Paradise Reels but we’d be amazed if you decided that it was one of the top ten slots on the Virtue Fusion network.