If you don’t like Monty Python then…well, what’s the matter with you? For everyone else, this game is full of surprises, jokes, moments of excitement and plenty of other things that will keep you coming back for more. 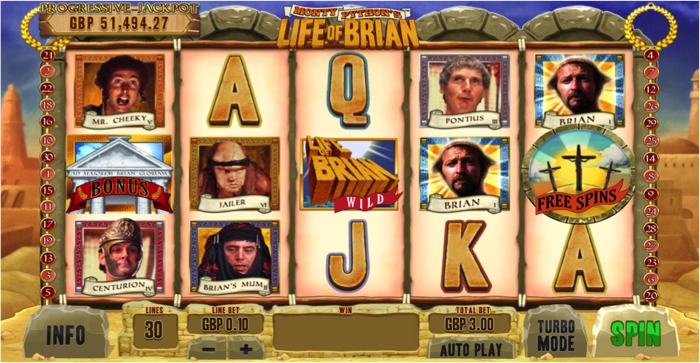 In terms of special features, Monty Python’s Life of Brian slot has enough to rival even the most impressive of online games. Here’s a look at each of them:

Arguably the least interesting of all of the possible bonus rounds, Wilds can appear at any time and replace any symbol except for the various scatters and special symbols. If there are three or more Wilds next to each other on active line then they will create a winning line all of their own. If a Wild ends up creating several wins on the same line then only the highest paying on will count.

Life of Brian Bonus Round 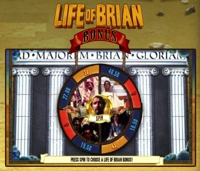 Getting a Roman looking building Scatter symbol on reels one, three and five will activate the Life of Brian Bonus Round. Only it’s not really a round as much as it is the chance to play one of four different bonus features. You’ll need to spin the wheel to find out which of the four features you’re going to end up playing, with the spin also deciding whether you’re going to get a cash prize, a win multiplier or a mystery prize. Here’s a look at each of the four potential bonus rounds within the Life of Brian Bonus Round: 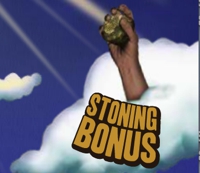 Brian’s mum has decided to take him to a stoning; you know, for a laugh. You’ll be asked to pick a person to throw a stone at for a cash prize, with the potential being there that the other characters might also get some smaller pebbles thrown at them for mini-prizes.

If there’s a suspicion that there are women watching you might get to tug at a beard or two, with a cash prize coming your way if it’s fake! The bonus keeps going until the big rock is thrown. 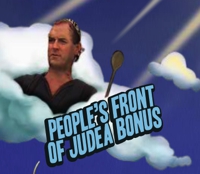 What have the Romans ever done for us? That’s the question being asked by the People’s Front of Judea, who are planning to overthrow them.

You’ll see a list of things that the Romans actually have done for us and clicking on each will reveal a prize. Carrying on making picks and winning prizes until you reveal TA VINST with one of your selections.

There’s nothing funnier in a movie than a joke about Latin grammar. The same is true of a slot game, with this particular Roman grammar joke giving you the opportunity to win some cash prizes. Brian has been tasked with sending the Romans a message, so you’ll need to daub it on the Palace walls. The more that you paint the higher you’ll see your prize climbing, with the bonus round ending when the sun comes up.

Pontius Pilate has heard tell of a man named Bwian and has decided he should intewogate him. The pwoblem is that his guards find it vewy funny when he speaks. You’ll need to select one that you think will be able to keep in his laughter duwing the intewogation – the longer he lasts without bursting out with laughter the more money you’ll be wewarded with. The bonus wound will keep going until all thwee guards can not longer contain their laughter.

All four of the bonus rounds contained with the Life of Brian Bonus Round will allow you to win up to one-thousand times your stake.

In the Life of Brian game, even when you’ve lost you might not have lost. If the reels spin and your game is not a winner then keep an eye out for Brian falling down through them. He’ll be caught by the Alien Spaceship, turning a stack of the symbols on your game into Wilds. The reels will then end up re-spinning and more symbols will be turned Wild, changing the whole game into some sort of inter-galactic battle. The bonus round will carry on until you’ve won something. 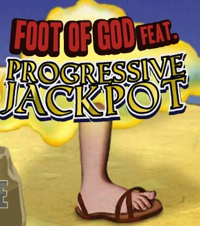 After every spin, whether successful or not, and after every bonus round, there’s a chance that you might see the Foot of God stamping down over the reels. If it does then you’ll be rewarded with a cash prize. You’ll be asked to pick a holy item, with sandals, gourds and juniper bushes all on offer.

Always Look on The Bright Side of Life Free Spins

Crucifixion wasn’t so bad, was it? All that standing about and singing with other. If you see a cross arrive on reels three, four and five then you’ll be getting some Free Spins heading your way. You’ll need to select one of the crack suicide squad members of the Judean People’s Front, resulting in the number of Free Spins you’ll get revealing itself. Every time the spin is a loser, you’ll see that your Win Multiplier has gone up. Collect three Golden Cross Scatters during the Free Spin game and you’ll enter the Crucifixion Bonus Round. 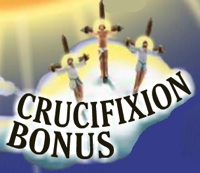 Only accessible via the Free Spin round, this game asks you to pick one of three crosses. Behind the cross you’ll find one of three prizes:

Whichever you get, you’re onto a winner.

The progressive jackpot that features in the Life of Brian slot game can only be triggered during one bonus game – the Foot of God. There’s nothing special involved in this one, though. The Foot of God will come down as described in the bonus round section above, only the cash prize that you win will be the progressive jackpot. How much of the jackpot you get is reflected by how much money your stake contains.

Time and again we’ve made the point that you shouldn’t let a game’s Return To Player percentage dictate whether or not you play it regularly. The reason for that is simple, insomuch as there are often games with RTPs of around the 94% mark boasted by Monty Python’s Life of Brian slot, meaning that you’ll need to see if there’s anything else that separates them from each other. After all, if a game is boring to play then it won’t really matter than its RTP is 98% or similar, as you simply won’t be engaged enough to care and won’t keep coming back to it. When it comes to the gameplay, we’re willing to bet that Monty Python fans will come back to Life of Brian time and again.

There are many reasons why this slot works. For starters, the theming of the game is consistent throughout. The reels stand in front of a Judean background, with the numbers of the lines written on a Roman standing pole. The various buttons, from ‘Spin’ through to the pay table info section are located on rocks at the front of your screen. Then there’s the symbols, from the Jailer through to Mr. Cheeky, via Pontius Pilate, a Centurion and even Brian’s mum. Anyone who’s seen the film will recognise the cast of characters that are there to greet you when the reels start spinning. The game works smoothly enough, with nothing particularly concerning about the gameplay in that sense.

There’s no question, though, that it’s the special features of this game that really set it apart from its competitors. Once again, all of the bonus rounds fit in perfectly with the style of the movie and the theme of the game itself. From the many different bonuses that exist within the Life of Brian Bonus Round to the extremely Python arrival of an Alien Spaceship right in the middle of the game, it’s absolutely bonkers and incredibly fun. You’ll recognise loads of the different motifs of the game, plus it’s worth leaving your sound on for the different noises and songs that appear throughout your playing time. All-in-all this is one of the most fun games on the Virtue Fusion network – providing you like Monty Python, of course!