If you haven’t played a slot with a honeycomb structure before then now is a good time to give one a go. Before you do, though, make sure you’ve had a read through our in-depth review so you can find out what you need to know about how it all works. 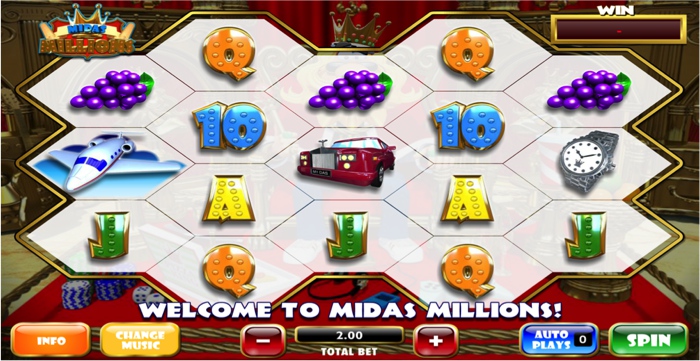 Midas Millions boasts a number of decent special features, but they can take a little bit of time to get your head around because the honeycomb structure of the game means that they don’t work in the same way as on normal slots. Here’s a look at each of them in turn:

There are two types of Crown that you might see land on your reels during your playing of Midas Millions, with the colourful one being a Wild that can substitute in for any other symbol apart from Gold Crowns. They can help create a winning group, but can only create one winning group even if their position means that they might be able to create more than one. If there are two Wilds on the same row diagonally then King Midas will connect them, changing all symbols in between them into Gold Wilds.

If you land a Gold Crown Wild then you’ll find that it transforms all of the other symbols gold. Not into Gold Crowns, mind, just turns them gold. That’s still good to witness, however, as gold groups will payout at twice their value. Unlike with Colour Crowns, two Gold Crowns next to each other won’t connect. They will pay out the highest available group, however, so at least that’s something. Again, Gold Crowns will substitute in for anything.

Another variation on the Wild theme comes in the form of the Super Wilds, which sees King Midas touching up to six adjacent symbols and turning them into Gold Wilds. They will then turn any symbols in the same group into gold versions of those symbols, once again resulting in you being paid out at twice the normal rate. Super Wilds won’t connect with ordinary Wilds, but there’s no limit to which symbols they will swap with. 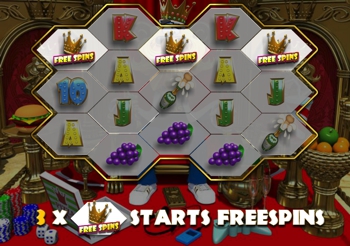 If you hadn’t guessed by now, Crowns are the favourite symbol of the Midas Millions game. In this instance the Free Spin Crown will give you ten Free Spins if there are three of them anywhere on the reel.

The game will begin almost immediately and you’ll watch the Free Spins take place. This game also features the Locking Wilds feature, during which King Midas may deign to lock Wilds into place instead of the normal symbols. He will do this with up to two symbols and they’ll then stay where they are until the end of the Free Spins. 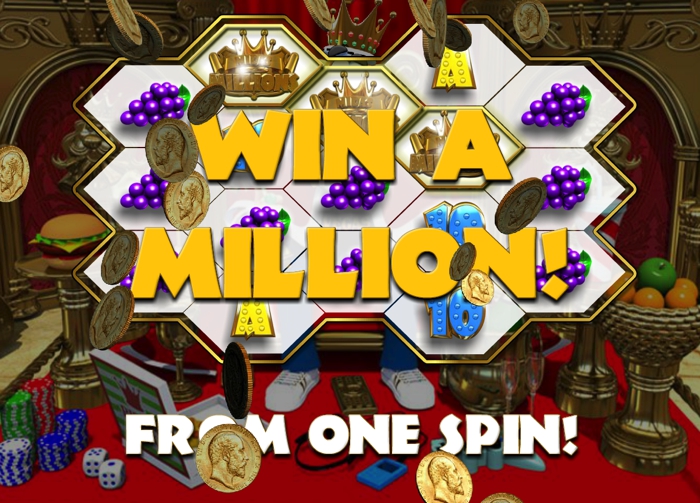 This isn’t technically a special feature, but it’s worth drawing your attention to regardless. If you land twelve or more of any symbol and they’ve been made gold then they will pay out £1,000,000. That, we suspect, is where the game gets its name from.

The Return To Player average for Midas Millions is probably the best place to start when we consider whether or not this is the game for you. It sits at 94.02%, which is smack bang in the middle of the ‘mediocre’ category. 94% is the amount that you’ll find with the majority of Virtue Fusion powered games, so if you want to get excited about the fact that this is .02% better than that then you go ahead. We were a little disappointed, considering there are significantly better games out there with RTPs of closer to 98%. Of course, how much that bothers you will depend entirely on the importance you put on a game’s Return To Player average. Midas Millions isn’t the sort of game where you’ll be able to invest a reasonably small stake at the beginning of your play and then keep going with it indefinitely, simply because the RTP isn’t high enough for that to be the case. If you’re allowing your selection of a game to be dictated by its RTP average, however, then you’re always likely to have to play some slightly less interesting games as a result.

The big question as far as Midas Millions is concerned is whether or not the gameplay is good enough to keep you coming back time and again and, on that front, we were once again left disappointed. Perhaps it’s because of the honeycomb layout and the fact that we like a more classical game, but whatever the reason we found this slot to be lacking in entertainment. The honeycomb layout means that the traditional spinning of reels simply isn’t possible, so instead each individual segment spins around until it lands on its chosen symbol. The funny thing about that is the game isn’t particularly graphics heavy, yet it still seems to struggle with what’s being asked of it. If you concentrate on one segment then it’s fine, but if you allow yourself to take in the whole of the game as it turns you’ll notice it looks a bit blurred. The various special features are also a fair bit more complicated than we’d ideally like, with differently coloured crowns doing different things and constant references to the rules being necessary to understand what’s going on. Even if you manage to trigger one of the features you might not even realise it, such is the way the game plays out.

Having said that, there are some slots that don’t have any special features at all so at least Midas Millions has got that going for it. There are some nice things about the game, too. The theme is well thought-out, with the reels being located in front of King Midas himself in his room of riches. It’s a rather more modern interpretation of the King Midas story than any bible-lovers amongst you might be used to. He’s a rather hip looking chap, which is reflected in the fact that you can change the background music that you listen to if you’ve got your volume on. You can opt for either ‘King Bling Beats’ or ‘Golden Groove’, though neither are going to win a Grammy Award any time soon. The symbols all look like the sort of thing that you can imagine a king asking for, including a Bunch of Grapes, a Popping Champagne Bottle and a Car. It might have been nice if the makers of the game had tried to come up with a way to make more of the ‘Spin’, ‘Info’ and other buttons, but perhaps that’s nit-picking. All told the game is perfectly fine if you’re only after a brief distraction, but if you’re hoping for something a little more substantial then Midas Millions is unlikely to be for you. Add in the rather mediocre RTP average and you can see why the temptation will be to look for something better.