There’s plenty about the Mayan Mania game that regular players are likely to enjoy, mainly because it’s a bit different from the majority of slot games out there. Our in-depth review will tell you more of what you want to know. 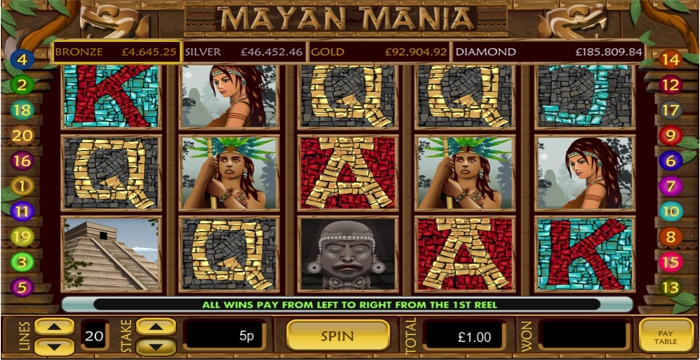 There are a couple of interesting things about Mayan Mania that you’re going to want to know, with two main special features worth reading about: 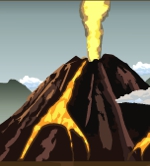 Whilst a volcanic eruption may have contributed to the Mayan plunge into a Dark Age, in the Mayan Mania slot, seeing this volcano symbol pop up is a good thing!

The Volcano symbol is a Wild and will substitute all other symbols in the game. If it completes a winning lines for you then you’ll be paid out according to your stake. 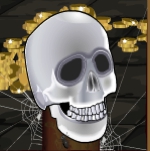 If you see a Crystal Skull land on the first reel of one of your active lines then you can allow yourself to get a little bit excited – you’ll be entering into an exciting and interesting bonus round. You’ll enter a room with several Crystal Skulls, with the central one beginning a journey from left to right and then back again.

There’ll be a ‘Stop’ button for you to press in order to cease the Crystal Skull’s movement, with a light then falling on one of the Crystal Skulls in the room. When that happens an amount of money will be revealed to you, dictated by the size of your stake per line. If for some reason you don’t want to stop the central skull then it will stop automatically after a given amount of time has passed.

If you get five Volcano symbols appearing on any active line within your game then you’ll have triggered the game’s progressive jackpot. The interesting thing with Mayan Mania is that there are actually four different progressive jackpots, with the size of your stake dictating which one you’ll end up playing for. Here’s a look at what you need to know about each of them:

The entry-level progressive jackpot amount, Bronze is what you’ll be playing for if you stake from 5p the 30p per line.

The progressive jackpot that’s open to you will shift to Silver if you play either 50p or 75p per line.

The Gold jackpot kicks into gear for bets of £1.

As any girl with a best friend knows, there’s nothing that you get that’s better than a Diamond. That’s why that’s the level you’ll play for with bets of £2 per line.

The amount of the progressive jackpot you’ll win is determined by your stake amount. If you opt for the lowest amount of 5p per line then you’ll get 2.5% of the jackpot, moving steadily upwards until you see 100% for a £2 stake.

There’s something genuinely rather lush about the Mayan Mania game. From the Mesoamerican music that kicks in when the game first loads up through the the fact that the reels are sitting on a Mayan-style wall, everything about the theming suggests a game that’s somehow based in a time long past. The line numbers are written on oval shaped pieces of wood, ‘attached’ to a building that fits perfectly in with the rest of the game. There are sloping vines around the top of the game screen and the symbols all look perfectly in place. There are Mayan men and women, as well as a Mayan Stela Monument and a Mayan temple. Even the Jack, Queen, King and Ace symbols appear to be made up of stones that are perfectly in keeping with the era. Then, of course, there are Crystal Skulls and Volcano’s that make up the feature game symbols and the Wilds.

How a game looks and feels is vital to the overall impression you form of it, but there’s no doubting the fact that the overall play is what matters the most. In that sense, Mayan Mania is fine. The reels don’t spin all that smoothly, looking a bit blurry when they’re in motion but in a manner that suggests that the graphics aren’t good enough rather than they’re in motion. That takes away from some of the suspense of the game, thanks to the fact that you don’t really know which symbols are landing until they’ve all come to a stop. That said, if you’re on for a decent win then the last reel will keep spinning a little bit longer and the sound of the game will let you know that there’s something exciting happening. The Crystal Skull feature game is interesting but not exactly thrilling, so that might not be enough to get you returning to Mayan Mania more than once or twice.

The Return To Player amount for Mayan Mania is 93%. If you’ve read any of our other reviews then you’ll know that we consider that to be a mediocre amount that you’ll get back on average during your gameplay. It will likely allow you to have a decent number of games without having to constantly top up your balance, but past that it’s not exactly going to be a figure that will entice you back if you don’t enjoy the gameplay itself. The lack of games outside of the standard slot play is a bit disappointing, so the combination of nothing overly enticing when it comes to how the game works and an RTP that can best be described as ‘meh’ won’t win over all that many of you. The theming of the game is really good though, to be fair, and for some of you that’s the sort of thing that makes a game worth playing regularly.