There’s more to Lotto Madness than meets the eye, so you’ll do well to read our review and get a more in-depth sense of how the game works. 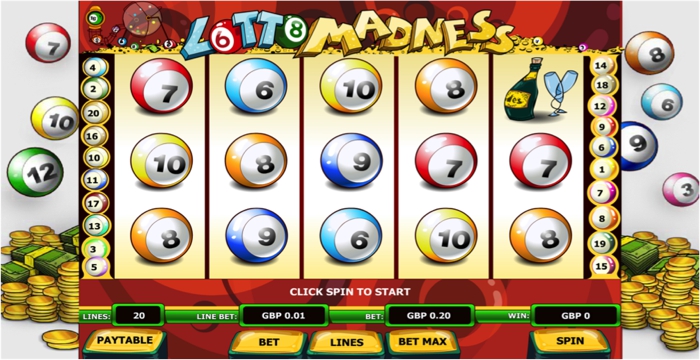 One of the first things you’ll want to find out about is how each of the special features plays out. There are a couple of them, too, so this game is more interesting than you might have thought. Here’s a look at each of them in turn:

Much as the purchase of a Scratch Card in reel life might give you the chance of turning a small amount into a bigger prize, so too does the Scratch Card feature of Lotto Madness. Here the symbol acts as a Wild, substituting in for any symbol on the reels apart from the Scatters and Bonus symbols. That means you might think you’re looking at a losing line only for a Scratch Card Wild to land and improve your chances of a payout.

The Dollar Scatter symbol is a good one to land, given that payouts for them are multiplied by your total bet and are in addition to any normal win lines you’ve landed. It’s a little bit like getting three number in the lottery, given that three Dollar Scatters anywhere on your reels will result in you being paid out at five times your bet. Hit five of them and you’ll get paid fifty times your total bet amount, which could turn out to be a decent amount of money.

Wheel of Fortune Bonus Round

Once you know how many Free Spins you’re getting and what your Multiplier will be for those Free Spins it’s important to actually spin them! You’ll do that by clicking the ‘Continue’ button, which will take you back to the main reels. If during your Free Spins you once again land the Wheel of Fortune Bonus Scatter on reels one and five then the computer will automatically select a possible outcome and add that amount of Free Spins to the ones you have remaining. Your Multiplier will remain the same no matter what happens.

There tend to be two schools of thought when it comes to which slot games to play. The first says that the most important thing to bear in mind is the gameplay, given that you might well end up spending a decent chunk of time playing the game and if it’s not very interesting or isn’t well made then you’ll get bored quickly. The second says that the most crucial thing to look out for is a high Return To Player average, given that that will likely allow you to play for a decent amount of time with a modest investment. Which side you come down on will dictate how you feel about most slot games, but when it comes to Lotto Madness you’ll be fine whatever your preference. The Return To Player average here is 97.06%, which puts it pretty darn close to the 98% you’ll find with the very best games around. It’s certainly well above the 94% that the majority of Virtue Fusion games seem to boast. That means that Lotto Madness is exactly the sort of game you’ll be wanting to play if the RTP average is the only that matters to you, so how is the gameplay?

You’re not going to be disappointed there, either. Lotto Madness is as graphics-heavy as some of the other big slot games on the market, but there’s plenty going on to keep you interested and the fact that the ‘under-the-hood’ requirements aren’t overly exciting means that the reels spin really smoothly and land without issue. That might not seem like something to boast about, but there are games out there with reels that look genuinely quite blurry as they whirl around, to the extent that they can give you a headache. It’s important to acknowledge when they don’t, therefore, and Lotto Madness pulls that off without a hitch. The special features are all good fun, with the Wheel of Fortune Bonus Round being an especially interesting mix of various genres. The Wheel of Fortune is famous both from the TV show of the same name and from casinos, so chucking that in to a slot game aimed at people playing bingo who fancy a game that is themed around the lottery is all sorts of meta. The features add to the game and do so in a way that adds value to it and gives the theme of it more levels.

Speaking of the theme, it’s there to see from the moment you load the game up. The reels sit in front of a background made up of stacks of money and bouncing lottery balls, the balls also in place to denote the line numbers. There’s a lottery machine in the top left of the game, whilst the symbols are all made up of things you’d associate with the lottery. More balls is an obvious place to start, whilst stacks of Cash, a Man holding some Cash and a Champagne Bottle also get involved as far as the symbols are concerned. The soundtrack is a little bland, if we did have a criticism, and it might have been fun to have the reels ‘spin’ around a lottery machine rather than the plain background that they’re actually on. It’s a decent game, though, and if you play it once then there’s an increased likelihood that you’ll keep coming back to it. That really leaves you to ask yourself whether the RTP is high enough to capture your attention. It really should be, for all of the reasons that we’ve outlined above, and if the gameplay appeals to you then you’re on to a winner. For us, this is one of the top five games on the Virtue Fusion network.