Little Britain is a fun slot game with loads to keep you engaged when you’re playing it. Read our in-depth review to give yourself a real sense of how it works and find out what you need to know before you play it yourself. 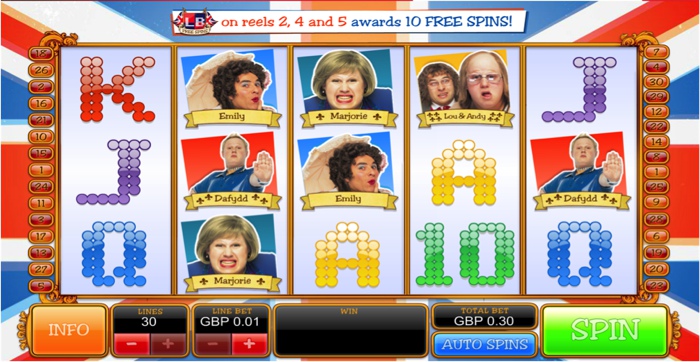 There are actually a decent number of special features available when you’re playing Little Britain, so have a read through this section in order to find out what each of them entails.

The first special feature is similar to one that you’ll find in countless other slot games, though it’s no less interesting because of that. If you land a Little Britain Wild then it will substitute in for any symbol except for Wilds. That means that if you have what looks like a losing line but there’s a Little Britain Wild on it, the line will suddenly become a winner. Get three or more Wilds and they’ll become winners in their own right.

If you get a Bonus Scatter symbol on reels one, three and five then you’ll trigger the Character Bonus Round. This involves you going to another screen where you’ll find characters from five of the main Little Britain sketches – namely Andy & Lou, Dafydd, Marjorie Dawes, Emily Howard and Vicky Pollard – on a wheel. You’ll then spin the wheel, which will land on a sketch character and you’ll start the associated game, which we’ll explain here:

Andy and Lou’s Love It Bonus

If wheelchair bound Andy and his long suffering friend Lou arrive on your screen during the Character Bonus Round then you’ll be offered a number of objects that you can pick from. That will result in said object being presented to Andy, who will then decide whether or not he likes it. The object will already result in a cash prize heading your way, but if he likes it then the multiplier that dictated your win will increase. At the end of the bonus round your total winnings will be multiplied by the amount that has been decided upon by how much or how little Andy likes the various objects, with the game continuing until Andy doesn’t like three different items.

If the only gay in the village is also the only gay on your screen after the wheel has spun during the Character Bonus Round then you’ll see numerous costumes arrive on your screen. Press the ‘Shuffle’ button in order to rearrange the tiles that the costumes are on and if they complete a full outfit then you’ll get a cash prize. If the ‘+1 EXTRA SHUFFLE’ symbol appears onscreen then you’ll get an additional Shuffle to the three that you’re offered at the start of the game. Once the Shuffles are done, so is the bonus game.

Marjorie’s aim in Little Britain might well be to help the local Fat Fighters lose a bit of weight, but here you’ll be hoping to see nothing but fatty foods. Every time you get a food type that a dieter wouldn’t really like to see in real life, such as a bag of chips or some cake, you’ll get a cash prize and the calorie meter will go up. The game will keep going until the calorie meter is full, but low fat foods will result in the calorie meter going down and your playing time extending. If you get some dust then the meter will drop down further still, so you’ll want fatty foods for prizes and non-fatty ones for more playing time.

Emily is a lady, you know. If ‘she’s’ the one that arrives on your screen once the Character Bonus Round is underway then you’ll see a number of different items arrive on screen. You’ll be asked to pick five of them, with objects being revealed for every one that you choose and a cash prize being associated with it. If you pick feminine objects then you’ll either be granted with more picks or a better win multiplier. The bonus round is over when you have no picks left, at which point the multiplier you were awarded during the game will dictate your total win.

Does Vicky Pollard have a game, too? Yeah, but no, but yeah, but no, but yeah. Her game involves life choices being presented to her, which you’ll get to pick. Once you’ve made your selection, Vicky will weigh-up whether or not she wants to take that life choice and the longer she witters on for the bigger the prize that you’ll get. If her general chatter ends with her saying the word ‘Yes’ then you’ll get to make another life choice, whilst if she says ‘No’ the bonus game will be over.

If you land a Free Spin Scatter on reels two, four and five then you’ll be taken to. Free Spin game, which takes place on the same lines that were active when you started it and with the same bet amount. You’ll get ten Free Spins, which is decent enough on its own, but there’s also the chance that you’ll get Stacked Wilds on one or more of your reels. A complete character will mean you’ll get winnings separate from the Wilds that landed on the other reels, giving you the chance of getting a Win, A Big Win, A Super Big Win or a Mega Big Win.

Last but not least is Anne’s Wild Bonus. This involves Anne, played by David Walliams, arriving on screen and throwing objects at different symbols. Those symbols will then turn into Wilds, with you picking up a decent win if they line up appropriately.

Not the best of the various special features in the game, but not exactly one that you’re likely to complain about if it happens and it can happen at any time during a game.

Even if you’re not a fan of the Little Britain TV show you’ll want to play their take on a slot game. It’s genuinely brilliantly done, with a theme that fits perfectly with the title of the game. From the moment you load up Little Britain you’ll be presented by a video introduction featuring many of the most loved characters. Then the game proper starts and the symbols will be exactly the sort of things you’d expect to see, including Andy & Lou, Vicky Pollard, Dafydd and Emily. The reels sit in front of a giant Union Jack flag and are contained within what appears to be an ornate picture frame. The gameplay itself is exactly as good as you’d expect, with the ‘under-the-hood’ capabilities being more than able to cope with the game’s graphics. The reels spin nice and smoothly, landing easily and without any of the blurring that you’ll see occur on the reels if you play one of the older Virtue Fusion games out there. This isn’t something that you should under-estimate, given that when you hit a winning line a small video of a clip from the show will play, with the relevant character saying their catchphrase for your amusement. In other words, there’s a lot going on but the power of the game can handle it.

When it comes to the special features of Little Britain, they’re all really well thought-out and interesting. The last thing you want when playing a game with a recognisable theme is a set of in-game bonuses that don’t seem to make any sense. You get the exact opposite here, with even the Free Spins game fitting in perfectly with the rest of the slot. Even if you didn’t actually like the TV Show you’ll be impressed with the way the makers of this have come up with a mini-game that suits the various characters. From Dafydd’s desire to find an outfit that suits him through to Vicky Pollard’s inability to shut up, you’ll be delighted to see any of them during the Character Bonus Round as it means that you’re likely to win a decent amount of money. If Anne appeared randomly at any other point of your life you might be a little bit concerned, yet here you’ll be really pleased when she starts throwing things at your reels and creating a load of Wilds. In short, this is a game that is truly well-made and will delight both massive Little Britain fans and those that don’t like the TV show but enjoy slots that are intelligently put together.

We’ve always maintained that the gameplay is the number one thing that you should think about when it comes to which game you should play, given that you can spend a decent amount of time doing so and if it’s boring or not well-made then you’re going to get sick of it reasonably quickly. Yet for some of you the Return To Player average is what will dictate your choice of game, so how does Little Britain stack up? On that front it is, admittedly, a little bit disappointing. 94% is the same number that you’ll find on a decent chunk of Virtue Fusion powered games, meaning that the one offered by Little Britain doesn’t really set it apart from any others. There are a number of games with a lower RTP than this one, of course, but there are plenty that offer higher RTPs too. If you’re the sort of person who thinks about the Return To Player average more than anything else then you’ll be pleased to know there are some games that go as high as 98%, but if you allow that to put you off playing the Little Britain slot then we genuinely think you’ll be missing out. There aren’t many games as good as this one.