This is a game that works a little differently from some others you might be used to, meaning that there’s plenty to learn here if you’re a first-time player. 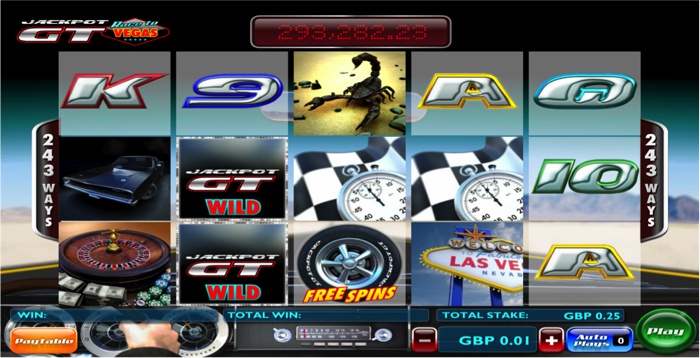 There are a number of different special features to keep you amused and entertained whilst playing Jackpot GT, so we’ll try our best to explain them to you in quite simple terminology. 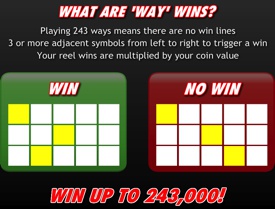 This game doesn’t use Line Wins as you might be used to in other slots. Instead there are 243 Way Wins available, meaning that three or more symbols adjacent to each other on lines will result in you winning a prize.

The symbols could be top of reel one, bottom of reel two and in the middle of reel three and you would have won. If three of the same symbols are on reel one, reel two and reel four, however, you won’t have won anything even if they’re all on the same line. It’s just a different way of playing that ends up with the same sort of outcome, being honest.

When it comes to the actual Special Features of the game, let’s have a look at what you need to achieve in order to be on the receiving end of some Free Spins. If you land the Tyre symbol on reels one, three and five then you’ll be rewarded with some Free Spins accordingly. At that point the reels will expand and you’ll be confronted with one-thousand and twenty-four ways that you can win. Other bonuses won’t be triggered during a Free Spin game, but that’s ok as there’s still plenty of money to be won.

The Wilds game on Jackpot GT is fairly standard, with the Wild symbol able to substitute in for all other symbols with the exception of any Scatters that are in play. The Wilds can be stacked for both the base game and also the Free Spin game, which is something worth looking out for. 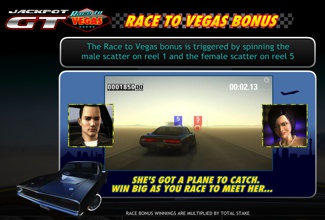 If you land the Male driver on the first reel and the Female driver on the fifth reel then get ready for excitement – the Race to Vegas is about to begin. Your partner is on her way to the airport to catch a plane and you want to meet up with her before she does.

As you enter this bonus round, you’ll find your car starts to drive along the motorway. You’ll be in charge of it, using your keyboard to decide whether to turn left or right and pass through certain gates along the way. If you don’t want to do that then you can just click on ‘Auto Race’ and the computer will do it for you. Each of these gates mean something different, as we’ll explain here:

This results in a cash award. Driving through a Red Gate will see your stake multiplied by a certain number, meaning more cash for your pocket.

The Race to Vegas is a race against time, so driving through a Blue Gate will add ten seconds to your journey time. If it’s a choice between Red or Blue then you might be tempted to lean towards Red and claim more money, but remember that if you Las Vegas you’ll have a chance to win even bigger cash prizes.

What’s in the box? What’s in the box?! That’s the question you’ll be able to find an answer to if you drive through the Green Gate. This will see you receive a Mystery Prize and doesn’t everyone love a surprise?

Your Race to Vegas will continue until the clock hits zero, so keep your eye on it and aim for some Blue Gates if you want to keep driving for a little bit longer. If you reach Vegas then you’ll get to have a go on a slot machine on your way out of one of the casinos – very meta – and you’ll be guaranteed a prize. If the 7s come up multicoloured then you’ll be getting a medium prize; if the 7s are all Blue then the prize you’ll get will be big; if the 7s are all Red then it’s a large prize for you.

Spin for Luck and the Progressive Jackpot

That slot game that you’re playing in the casino when you’ve reached Las Vegas with your partner is also the way that you can win the progressive jackpot. If you press the button and three Golden 7s come up then get ready to celebrate – you’re a winner! The amount that you win will be reflected by the size of your stake. You can bet up £100 in total and you’ll need to have opted for the full amount if you’re looking to win the entire progressive. At the time of writing that sits close to £300,000, so it’s not to be sniffed at.

The Return To Player on Jackpot GT is 94%, which is decent enough without being the sort of amount that you’re likely to run home and tell your partner about. It’s more than a good chunk of games but less than a fair whack of others, so it’s unlikely to sway you about whether or not to play this particular slot. We always talk about not letting the RTP dictate whether you should play a game or not and Jackpot GT is the perfect example about why. If you go off the RTP alone then you might not think it’s worth it, but if you did that then you’d be missing out on a genuinely fun slot that you can really begin to get into the gameplay of.

Everything about this game suggests a lot of thought has been put into it. The driving theme is well executed, with the reels sitting in front of a road and the play buttons looking like they’re part of your car’s dashboard. Even the most boring symbols within the game itself look like they’re taken from a speedometer, with the others being made up of the likes of the Welcome to Las Vegas sign, a roulette wheel and an expensive looking car. The Wilds add a bit of mystery to proceedings, whilst the Free Spins and Speedometer bonus do enough to keep you interested throughout. Unquestionably, though, it’s the Race to Vegas that make this game what it is. It turns it from just another slot with a clever theme into something of an arcade game, complete with the ability to choose your own path along the way.

If you’re all about the immediate money entering into your pocket then you can steer your car through all of the Red Gates you see and watch the winnings stack up. If, on the other hand, you want to see if you can win big then you’ll be able to aim for the Blue Gates and give yourself more time to get to Las Vegas. Where else would your journey come to an end than in Sin City? The meta slot machine you’ll play on as you leave the casino is a fun little way to end the Bonus Round, with the potential of hitting that progressive jackpot meaning that you’ll forever be trying to get back there to pull that lever one more time. It’s these extra games that bring Jackpot GT to life, elevating it above the status of ‘just a slot game’ into something a lot more exciting and intriguing. We’ll be very surprised if you don’t return to this game time and again.