There are plenty of different aspects involved in the playing of Innocence or Temptation, so you’ll want to make sure that you read our review thoroughly in order to ensure you fully understand both how the game works and whether it’s really worth engaging with. 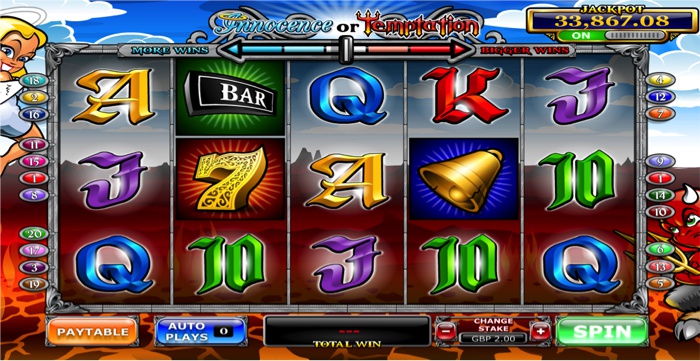 When it comes to Special Features, Innocence or Temptation is chock full of them. From deciding whether or not you want more payouts or bigger ones through to the introduction of Wilds and Super Cards, there’s enough here for you to be getting your teeth into.

The Slider Of Temptation

Let’s start in the most obvious place for this game, the Slider of Temptation. As with any classical sense of being tempted into something, you’ll see there’s an Angel trying to persuade you to be innocent and a Devil trying to tell you that Temptation is the way to go. It’s not as binary as just choosing one over the other, however, with five different positions available for you to choose from. Here’s a look at them all:

This is the game’s starting position, with the Slider sitting exactly halfway between Innocence and Temptation. This is where you’ll want it if you just want it to play out like any other slot, with as even a mix as possible between the frequency of your wins and the size of them. Wilds are placed evenly and Bonuses happen as often as you’d expect.

This is a halfway house between Neutral and Very Innocent, with wins coming slightly more often than in Neutral mode but not all of the time.

You’ll better understand what you’re likely to experience in Innocent mode by knowing what Very Innocent entails. You’ll get wins on a fair more regular basis but they’ll be quite small, with Wilds happening more often on reels one, two and three to ensure smaller wins from the three-of-a-kind category. Bonuses will also occur more often.

At the opposite end of the spectrum to Very Innocent is Very Tempting. If you consider yourself to be something of a risk taker then this will be the setting for you. Wins won’t happen as often but when they do come they’ll be much bigger. The Wilds tend to be on reels three, four and five, giving you an increased opportunity of four of five-of-a-kind type wins. You’ll get less Bonuses, but they’ll be big when the do occur.

A halfway house between Neutral and Very Tempting, this will be the setting you’ll want to use if you like taking a bit of a risk but like the idea of getting semi-regular wins.

If you find Free Spin symbols appearing on reels two, three and four then it’s good news – you’ve got five Free Spins coming your way. As with virtually everything on this game, though, that’s not quite the full story. After each of the Free Spins you’ll be asked to select one of four cards, which are Free Spin Modifiers and will change the way the game is played. Here’s how they work:

Does as it says on the tin, multiplying your win by a given amount. If you get an Angel card then your wins will be multiplied by two or three, whilst. Devil card will result in a Multiplier of four or five.

You’d be forgiven for feeling as though you know where this one is going to go, but you don’t. The Extra Wild doesn’t actually differentiate between Angels and Devils, with the symbol found during your Free Spins simply resulting in between two and five Extra Wilds being added to your game.

What’s not to love about the appearance of this one? An Angel Cash Prize card will result in you being on the receiving end of a cash prize worth between two and four times your stake. A Devil Cash Prize card, on the other hand, will see your cash prize being between five and ten times your total stake amount. Delightful. 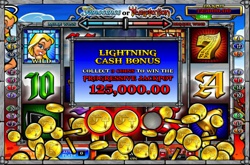 Just to keep you on your toes even further, Lightning can strike at any point during the game. If it does and it hits the middle reel then you’ll be on the receiving end of a Cash Eruption.

It last for any length of time, with the longer it takes resulting in you getting more and more money. This is also how the progressive jackpot can be triggered.

Lightning Strikes for the Progressive Jackpot

If you are lucky enough to trigger the progressive jackpot then remember that how much of it you’re able to take home will depend entirely on how much money you’ve set your stake to be worth. The higher the amount your stake is, the more of the jackpot you’ll win. That’s up to a maximum of £200.

There’s something to be said for games that follow through with their own themes. Occasionally you’ll find a slot from the Virtue Fusion canon that doesn’t quite know what it wants to be, offering one theme for the game proper and something else when it comes to how the rest of it looks or how the bonuses are played out. Innocence or Temptation has a very specific theme and sticks to it throughout your gameplay, with the Slider of Temptation adding a really fun little aspect to the way you play. You can literally dictate whether you’re happy to win less often in the hope that your wins are big ones, or if you’d prefer to win more but accept that those wins will be smaller in value. That’s a really clever feature that adds a sense of jeopardy to your playing.

The game runs smoothly enough, even if the video that comes up when you load it is a little juddery. The Devils look suitable tempting and the Angels are innocent enough to make you consider what the best thing to do is. You can also change where on the Slider you have the play in between spins, so if things are going against you you can always mix it up to see if you can get a couple of smaller wins under your belt. The Super Cards are also an interesting aspect to your gameplay, turning Free Spins from something that can be a little bit boring if you’re not winning into a more entertaining way of playing. The combination of exciting gameplay and the ability to mix things up with a consistent theme throughout makes this a really good slot to play.

Interestingly, the Return To Player percentage of 94.16% remains the same whether you’re playing on Very Innocent or Very Tempting mode. That’s suggestive of the idea that you’ll get plenty of small payouts that add up to the same amount as one of the big payouts, depending on which mode you choose. If you like to win often, therefore, then opting for Innocence will suit your playing style. On the other hand, if you enjoy feeling as though you’re taking the house to the cleaners then being a Devil will be more interesting for you. The mode you select will also dictate how often or not you see the Angel and Devil cards during your Free Spin mode. All told, a fun and engaging game.