Another of those games from Virtue Fusion that doesn’t take an awful lot of brain power to get into, here’s our review of Hollywood Boulevard. 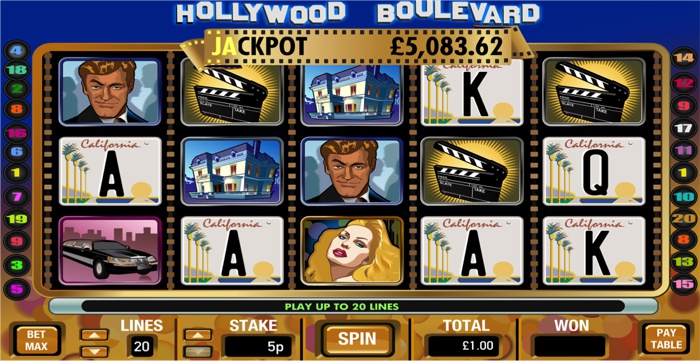 There are only two Special Features on Hollywood Boulevard and, in truth, they’re not all that special. Have a read to see what we mean.

Real stars neither need nor want the attention of the paparazzi. They’ll be a success regardless of whether or not they appear in the papers on a regular basis. B-listers, on the other hand, need to appear in the press all the time to keep themselves relevant. It’s entirely fitting, therefore, that the Paparazzi symbol on Hollywood Boulevard will lead to some Free Spins. Get three or more Paparazzis and you’ll receive Free Spins depending on how many of them are on your reels. Three is ten Free Spins, four is twenty and five is thirty. You’ll be paid out on any winnings according to your stake amount.

Every actor dreams of a star on the Hollywood Walk of Fame. On Hollywood Boulevard a Star symbol will become a Wild, unless there’s enough of them to trigger the progressive jackpot as we’ll explain in a moment. The Star can replace any symbol with the exception of the Paparazzi, so keep your fingers crossed that it will help you out and you’ll get a nice little payout on one of your lines.

As we’ve just hinted at, the Star symbol is also what you’ll be hoping for in order to land this game’s progressive jackpot. You’ll need five of them to land on active lines in order to be able to claim the top prize, with the percentage of it that you’ll be on the receiving end of depending entirely on how big your stake is. ‘Go big or go home’ is a well-known phrase, especially around the party neighbourhoods in LA. In Hollywood Boulevard that’s because you’ll only receive 100% of the progressive jackpot if you’ve placed the maximum stake of £2. You’ll then see your winnings drop off all the way down to 2.5% for a bet of 5p per line.

Given the Return To Player percentage of 93%, you’d be hoping that Hollywood Boulevard offered something pretty special in terms of it gameplay. Sadly, you’ll be left disappointed, with none of the graphics, the story nor the Special Features being interesting enough to get players returning again and again. The symbols are all interesting enough, from the glamorous Hollywood actress type through to the smooth looking actor/bodyguard/whatever. There’s also a limousine, a mansion and the most clichéd of Hollywood clichés, the clapper board. All told, though, this game is just a little too basic to get enthused about.

The reason that that’s something you’ll want to think about is that a mediocre RTP requires something else to keep you coming back. Some games cover that with top-notch graphics that make it a really enjoyable one to play, whilst others have Special Features galore that at least tempt you into trying to win a prize or two. The Free Spins feature is ok, but when all is said and done that’s not the same as the sort of thing you’ll find in other games when you’re pretty much guaranteed a nice prize in return for playing a bonus round. This game doesn’t even boast exploding reels, meaning that there’s just not enough in it to keep those of your disappointed with the RTP interested.

We always say that you should never decide on whether to play a game based solely on the RTP percentage and that’s certainly true here. It might well be that you give Hollywood Boulevard a spin and find it a lot more entertaining than we did. It’s not the worst game in the world, after all, and there are a few nice things to it. If you don’t mind a game that lacks the most up-to-date graphics and are happy enough simply spinning the reels and seeing where your fortune will take you then you’ll no doubt be satisfied by a trip down Hollywood Boulevard. For the rest of us, however, it will be more of a case of it being a B-Movie than a blockbuster.