Heart of the Jungle is an impressive game, rich in both graphics and gameplay. Give yourself the best possible chance of understanding how it all works by reading our in-depth review. There are a few different special features that will keep you entertained during your playing of Heart of the Jungle. Read this section to understand how they all play out so you know what to look out for when you play the game.

Heart of the Jungle Wilds

If you land a Heart of the Jungle symbol then don’t be too confused, it’s just this game’s Wild symbol. It can substitute in for anything except for the Free Spin Scatters. You can also win money if you land three or more Wilds together, meaning that they don’t have to substitute in for something else to increase your balance. 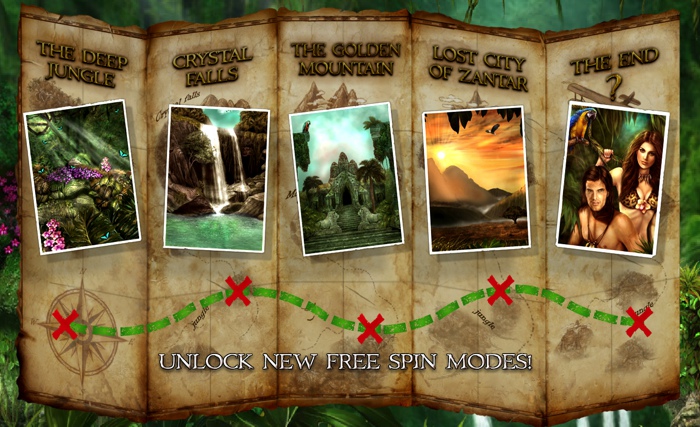 If you land a Free Spin Scatter, which looks a little bit like a large wooden mask, then you’ll trigger the Jungle Trail Free Spin feature game. That might make it sound a little bit boring but, trust us, it’s anything but. The game starts by taking you to another screen that looks a little like a map. On the map you’ll have a selection of Free Spin modes to choose from, with more unlocking the more often you hit the Scatters. It’s important to explain each one individually, so here’s a look at each of the different modes:

During this mode you’ll receive five Free Spins, with any wins that you land being multiplied by five. At the end of the Free Spins you’ll also get an Ultra Spin, which will give you a random win and a multiplier of anything up to 10x. This is the Free Spin mode that you’ll get to play the first time you land the three Free Spin Scatters.

Each Free Spin game offers something slightly different than the one before, with The Crystal Falls promising ten Free Spins. It unlocks once you’ve hit the Jungle Trail five times, reflected in the fact that you can hit up to five Stacked Wilds on the reels. They will sometimes jump to different reels during the Free Spin game and sometimes disappear altogether.

If you’ve been on the Jungle Trail ten times then you’ll get the opportunity to visit the Golden Mountain. Here you’ll receive fifteen Free Spins and during the game Wild symbols will stick to your reels. They’ll nudge either or up down every time you press the ‘Spin’ button, plus there’s a chance that the reels will end up reversing during the game.

The Lost City of Zantar

Unlocked after you’ve been on the Jungle Trail fifteen times or more, The Lost City of Zantar offers twenty-five Free Spins. You’ll see a Wild symbol appearing on the middle row of the symbols, with the possibility that it might move horizontally between the various reels during Spins. It can also increase your multiplier, which will obviously result in more money heading your way.

As you unlock each of the different Free Spin modes you’ll also unlock Payment Boosts for each of those modes. You’ll also get them unlocked after your twentieth, twenty-fifth, thirtieth and thirty-fifth visit to the Jungle Trail. As the name suggests, this will see an increase in the amount of payment you’ll receive according to the line-bet that unlocked the Free Spins.

As you do various things within the game, you’ll unlock different ‘achievements’. Examples of achievements include ‘Reading the Guidebook’, which you manage by pressing the ‘Info’ button, or the rather less desirable ‘The 1%’, which is what you’ll get if you spin the reels ten times in succession without winning anything. The Game Achievements don’t alter the Return To Player average or, indeed, affect the game in any way at all. Still, we wanted to tell you about it to temper any excitement you might feel when you’re told you’ve ‘achieved’ something.

Let’s start by having a look at the somewhat complicated Return To Player average of Heart of the Jungle. The beginning RTP that will be in play when you first start Heart of the Jungle is 95%, which is a little above average for Virtue Fusion games. It can go up to 97%, which is a decent looking average to hit on any slot game, but in order to get there you need to unlock the Payment Boosts. The problem is that you as a player have no control over when you’ll get on the Jungle Trail, meaning that you don’t know when or even if you’ll play a Free Spin game and therefore get some Payment Boosts. That means that, in reality, the game’s Return To Player average will sit at 95% for the majority of time that you play it. It’s not a bad amount, as we’ve already suggested, but if you’re going to play Heart of the Jungle for a while then you’ll soon realise that the promise of a 97% RTP is a bit of an exaggeration. Now we’ve pointed out in most our reviews that you shouldn’t really pick the game that you want to play based on an RTP, with the gameplay far more important in influencing your choice of something that you might end up playing for some time. On that front, then, how does Heart of the Jungle do?

In truth, we thought it was a little disappointing. The reels spin really nicely, with the game being modern enough ‘under-the-hood’ to mean that the heavy graphics involved in it don’t slow things down at all. Yet it just felt as though it was lacking something to make it more entertaining than other slot games on the Virtue Fusion network. It’s as though the entire game is about surface rather than reality, with things such as the Game Achievements signifying this more than anything else. Unlocking numerous ‘achievements’ might give the slot more depth, but if it’s not actually adding anything to the gameplay then what’s the point in it? Likewise, having four different Free Spin modes is wonderful, but if you don’t land the Free Spin Scatters on reels one, three and five then you’re never going to end up playing them. It flatters to deceive somewhat, including the opening ‘story’ when we see the stunning figure of a ‘Jane’ type character telling us about how the ‘Wild Man’ saved her from the Jungle. That story is not continued during the game itself, meaning that it’s yet another part of Heart of the Jungle that’s just a little bit pointless.

One thing you might be unfair to criticise is the game’s theming, however. The reels are located in front of part of the ‘jungle’, for starters, whilst if you’ve got your sound on then you’ll hear the sounds of the jungle coming through your speakers. The ‘J’ of Jungle in the game’s title is made from a large knife, lending to the idea that the overall theme works quite nicely. The symbols are a little bit more like the sort of thing you might expect to find in a game with a wildlife theme, such as a Parrot, Chimpanzee, Elephant and Leopard. Obviously you’ll also find the Wild Man and the Jane-like character that you meet at the start of the game turning up on the reels every now and again. The slot always plays with fifty lines and the lowest you can take your stake to is 1p, meaning that every spin will cost you 50p. That makes it quite expensive if you don’t win on a regular basis, which means that ‘The 1%’ achievement we mentioned before is essentially another way of saying ‘you’ve just lost at least £5’. In other words, this is the sort of game that you’ll likely really enjoy if you win on a regular basis but if you don’t then you’ll be wondering what it offers. With a mediocre base RTP, the answer is ‘perhaps not enough to keep you coming back for more’.