You might well fancy a holiday once you’ve played Hawaiian Treasure for long enough, so before you get too distracted to know what the game involves, make sure you read our in-depth review. 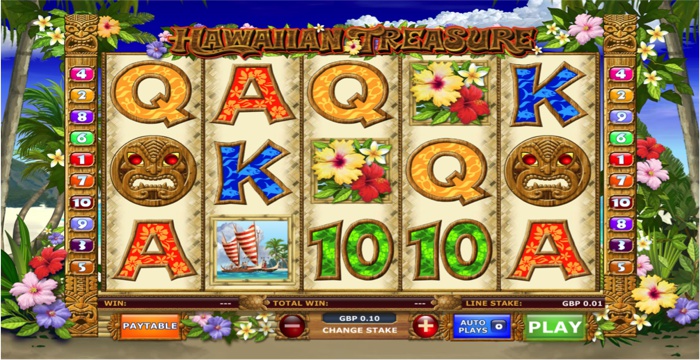 There’s one main special feature involved in the playing of Hawaiian Treasure, but there’s also another that’s part of it, if that makes sense. If it doesn’t then don’t worry, we’ll explain what we mean here:

The Tiki Mask is the main symbol you’ll want to see landing on your reels, partially because it’s what kick-starts the Free Spin game we’ll tell you about in a second, but also because they act as Wild Scatters. They’ll substitute in for any symbol in the game, which means a line can look like a loser but become a winner thanks to the presence of the Tiki Mask. 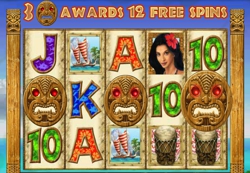 The big special feature of Hawaiian Treasure is the Tiki Mask Free Spin game, though there’s a little more to it than simply being awarded some Free Spins. You’ll trigger this game if you land a Tiki Mask Scatter on reels one, three and five. The reward is twelve Free Spins, but before they begin you’ll be transported to another screen where you’ll find a Hula Girl and five Tiki Masks.

At this point you’ll be prompted to choose three Tiki Masks and, once you’ve clicked on them, they’ll each dissolve to reveal one of the game’s symbols. Those three symbols will be the only ones included on your reels for the Free Spins, massively increasing your chances of hitting a winning line or two. The other two Tiki Masks will also dissolve to reveal their symbol after you’ve selected your three, just to show you what you could have won.

At that point the Free Spin game begins, with the reels containing just your three selected symbols and spinning around twelve times. Every time you get a winning line the amount you’ve won will be added to your ‘Free Spins Winning Total’, which will be revealed to you once the game is complete. At that point your winnings from the Free Spin game, along with any winnings from the initial line that triggered the Free Spins, will be added to your overall balance.

From the moment you start the game and see a Hula Girl dancing in front of an explanation of how the game’s Free Spin feature works, you’ll feel as though you’re being transported to another world. The Hawaiian theme is perfectly done, from the soundtrack of waves gently rolling onto a beach through to the strum of a ukulele when you hit a winning line, there’ll be no mistaking where the game is set once you start playing. The reels themselves are made up of what appears to be some sort of parchment, strung out between two Tiki totem poles. The entire game board stands in front of a beach and a blue sky, with plenty of Hawaiian flowers all over the screen. The symbols are made up of other things that you’d recognise from films or TV shows about the US state that’s located in the Pacific Ocean, including a Turtle swimming in crystal clear seas, Boats with sails and, of course, a Hula Girl. Even the 10, J, Q, K and A symbols look as though they’re wearing Hawaiian shirts!

The theme is all well and good, of course, but how does the game actually play? On that front you may well be pleasantly surprised. This isn’t just the sort of game where the makers have come up with a theme and thrown it into a standard slot-type skin. Instead it’s a bit more interesting than all that, with the reels spinning nice and smoothly and landing cleanly. There’s no sense of a blur that you get from some of Virtue Fusion’s older games, where the graphics can’t keep up with the gameplay. The addition of Wilds takes it from being an otherwise quite plain game to being one that offers players a bit more excitement, whilst the Tiki Mask Free Spin game elevates it even further. The fact that it plays with just three symbols means that you’ll feel as though your chances of winning a decent amount of money are much higher than if it played with the entire board, plus the fact that you get to ‘select’ those symbols means that you feel as though you’re actually having an influence over the game. It might have been nice if there was another feature game involved, but at least this is a good one.

The gameplay is decent enough to keep you entertained, then, and the theme is really well done. What about the Return To Player average? On that from Hawaiian Treasure is just ‘fine’ rather than exceptional. 94% is in-line with the majority of other Virtue Fusion titles, meaning that it’s a perfectly fine percentage to be playing with. Yet it also leaves you wanting slightly more, especially when there’s only the one special feature worth talking about. Other games creep up closer to the 98% mark, so if you find the Hawaiian theming a little bit boring then you might want to seek out one of them. That said, it’s always more sensible to base your game selection over gameplay than how much money you’ll theoretically get back from your initial investment. On that front we’re reasonably convinced that you’ll enjoy your time playing Hawaiian Treasure, though it’s entirely possible that you’ll want to win big in order to book yourself a holiday to the volcanic archipelago out in the Central Pacific.