There’s plenty to read about in our in-depth review of Firestorm, giving you a bit of a clue about how this sometimes confusing game works. Give it a look and judge for yourself. 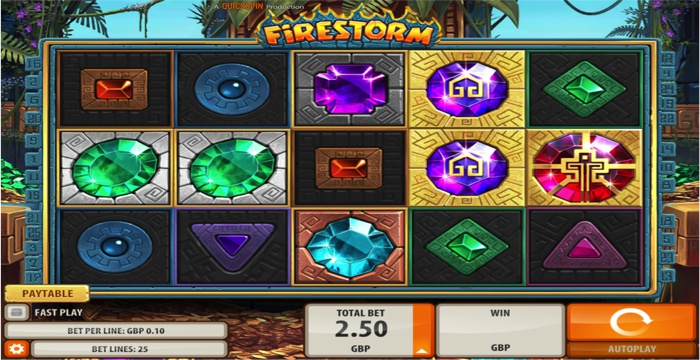 There are a couple of interesting symbols that trigger certain things during the Firestorm game, but there’s also a Respin Feature that takes some getting used to but promises a chance to win a decent amount of money. We’ll explain how they all work here:

There’s a Wild symbol in the Firestorm game that looks like a collection of green gems. This can substitute in for any symbol in the game to potentially create a winning line, with the only exception to that rule being the Firestorm bonus symbol that it can’t take the place of.

The Firestorm Wild, which looks exactly as you might suspect from the name, can substitute in for any symbol on the board, including the Green Gem Wild. This is also the symbol that you’ll want to see – and it’s difficult to miss it – if you’re hoping to play Firestorm’s bonus game.

If we’re totally honest, the Firestorm Respin game is a little bit more complex than some people will be hoping for. It takes a little while to get your head around, so reading our explanation here will put you in a decent position to know what you’re up to if you’re lucky enough to encounter it during your playing time. The Respin feature kicks in if you land two or more of the Firestorm Wilds on your pay lines.

Once the game’s got underway you’ll find that the Firestorm Wilds and any Free Gem Wilds are ‘locked’ in place. A randomly selected symbol will also be ‘locked’ for the Respin, increasing the chance of you hitting a winning line. You’ll also be pleased to know that the Respin feature results in the Main Game win being multiplied by two.

Wild symbols and a randomly selected symbol have all been locked in place, then, but what happens next? Firstly the reels are spun again, with any additional locking symbols that appear then also getting locked into place. Provided not all of the symbols on the reels are locked they will be spun again, with this going on and on until either all positions are locked in or no more looking symbols appear

Believe it or not, that’s not where this feature ends. Any time a Bonus symbol appears after the first two Bonus symbols that triggered the game, the multiplier in play for the Respin game is increased. That can keep on happening up until a maximum multiplier of five is in play.

We’ve mentioned before that this Bonus Feature is a little bit complicated and part of that includes figuring out how your winnings are calculated. The amount of money you’ll get is calculated by the total of the win from the Main Game at the multiplier amount in play there, as well as the win that comes from the final Respin multiple by the final Respin multiplier amount. Confused? Don’t worry, the computer will figure it all out for you.

Firstly, let’s have a wee chat about the Return To Player average that applies to the Firestorm slot game. It’s 96.57%, which is a really respectable amount. You’ll normally find that the majority of games on the Virtue Fusion network come in at around the 94%, so this is much better than that. It’s still a slight bit short of the 98% that is Mecca as far as RTPs are concerned, so if you’re the sort of player to whom the amount of money you’re likely to get back on your investment matters then you won’t be as pleased with Firestorm as you would higher paying games. The big question you’ll want to ask yourself is: does the RTP matter as much as the gameplay? That’s a matter of personal choice, to be honest, with plenty of different people feeling as though the ability to make a comparatively small investment and then play for ages on that stake is more important than how much fun they have whilst they’re playing. If that’s the case for you then, to be truthful, you’ll be pleased enough with Firestorm. It’s not one of the highest paying but it’s well up the ladder and it’s therefore worth sticking with if you enjoy playing it.

That’s a big ‘if’, though, and how much you’ll enjoy the gameplay of Firestorm will depend on how much of an investment you’re willing to make with it. It’s a complicated game that looks more exciting than it actually is, thanks in no small part to the fact that the Firestorm Wilds look like so much fun. If you play another slot and a massive ball of flames arrives on one of your reels then you’d be entitled to think that you were in for a big win. With Firestorm you could win absolutely nothing, or you could get two of the symbols and enter a convoluted Bonus Feature in which a casual player won’t have a clue what’s going on. Wilds lock into place, other symbols get involved and you’ll feel as though you’re winning loads of money, but are you really? It’s difficult to tell because the amount that you’ll take home will depend on the final Respin and the associated multiplier. The actual feature itself is quite fun to watch, with flames going all over the place and symbols flashing and locking before the reels start spinning again. Yet if you don’t know what’s happening, how much fun can you really have?

The Bonus Feature involves no interaction whatsoever, so you’ll just need to press the Spin button and see what happens. It makes the entire thing rather passive, which some of you might find slightly disappointing. There’s no real reason why they couldn’t come up with a feature that involves giving the player something to do. If you don’t care about ‘doing’ and are happy enough watching then you’ll be fine and the game plays smoothly enough to mean that you won’t be put off playing it. There’s a slight blur to the reels that doesn’t seem to be intended and more to do with the fact that the graphics of the game are a bit more heavy than the under-the-hood system can cope with. One of the things we haven’t mentioned yet is the theme of the game and if that’s something that matters to you then you’ll be pleased enough with what you find here. There’s a vague ‘Inca’ feel to the whole thing, with the reels appearing in front of some sort of lost city in a jungle somewhere. The line numbers can be found on runic-type pieces of wood, with the symbols made up of different types of gems. There’s also a jungle drum type of music selection that plays with the game, becoming more exciting when you spin the reels.