Firemen is a bit of an odd, modern game that you’ll enjoy playing if you’re a fan of things that work a little bit differently from the norm. Read our full review, in which we explain what we mean by that. 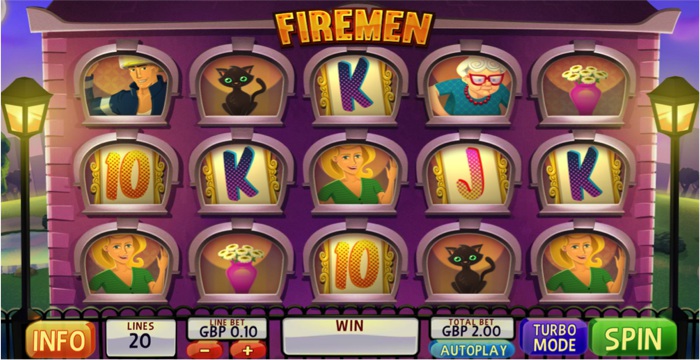 Firemen has a couple of decent features that are interesting enough to keep you returning to the game time and again. Here’s a look at how they work:

There’s a large Fireman’s Helmet that is this game’s Wild. It can substitute in for any symbol apart from the game’s Flaming Scatter, meaning that losing lines can become winning lines thanks to the presence of the Wild on them.

If one or more of the Burning Scatter symbols appears on your reel then a random feature will be triggered. There’s no limit to which reel the symbol can appear on either, but once it has there’s a chance that it will spread to all of the others on the reel and one of the following features will get underway:

In this instance, some of the symbols on the reel will become Firemen Wilds and there’s a chance that multiple winning lines will be formed. The winnings be awarded and the game will then return to normal.

This feature works in much the same way as the Wilds variation, with the difference being that Win symbols will be revealed one at a time. You’ll be awarded the winning amount associated with each Win symbol, with the game coming to a conclusion once they’ve all been revealed and the amount has been added to your account.

If the Burning Scatter feature doesn’t reveal a Win symbol or a Wild then you’ll find that it puts a selections of Bonus Symbols on your reels. All symbols will become Flames, allowing you to click on them to reveal a cash prize. As long as you keep seeing Flames then keep clicking on them, with the game only coming to an end once the ‘Collect’ symbol appears on the screen.

There’s something weirdly quite fun about Firemen as a game. We mentioned before that it’s a bit different from the norm and that’s down to theme. The game is quite cartoony, with even the ‘Info’ and ‘Spin’ buttons looking a bit like they belong on a comic strip more than a slot game. The reels are located inside a building, which sits in front of a big field and sandwiched between two lampposts. The symbols are ‘behind’ windows and the spinning takes place when the blinds shut. They open again to reveal what you’ve got on the board, though you have the chance of stopping them early if you feel as though you’ve spotted a symbol that you think is going to give you a win. The odd thing about a game called Firemen is that you’re actually hoping for fire to appear rather than hoping it will be extinguished. You’d think they might have thought to have a bonus reel whereby a fire starts and you need to stop it in order to win money, but instead the more a fire burns the better off you’ll be. An odd way round to do it.

It’s also a bit of a shame that you don’t really get to interact with the feature games at all. They just happen, without you having the chance to influence the outcome in any way. That means that if you’re the sort of person that likes to get involved with the game that you’re playing then you’re going to find yourself disappointingly passive during the entirety of your time playing the Firemen slot, with the exception of when you press the ‘Spin’ button. Even that doesn’t really occur if you use the ‘Auto-Play’ feature. Heading back to the theme briefly, it’s all a bit odd. The symbols are made up of various things that you could find inside a home, such as a Cat, a Vase of Flowers, a Grandma and a Housewife. There’s also a hunky looking Fireman, as you’d probably expect. There’s an extent to which it doesn’t really many any sense. It’s as though the game’s makers came up with the idea of a fireman and then fitted everything else around it. That said, the reels spin really smoothly and land well, meaning that it’s a game that is fun to play even if the theme doesn’t really work for us.

Are you the sort of person to whom gameplay is the most important thing, or are you more intrigued by what the Return To Player average is? If it’s the former then you can decide for yourself whether or not you think it sounds interesting to play from what we’ve said above. If it’s the latter then how does 95.03% sound to you? As far as RTP’s are concerned, it’s not amazing but there are plenty of worse ones out there. We think 98% is the dream number that you’ll want games to have, so if you’re only interested in how much money you can get back across the course of your playing time then this probably isn’t the slot for you. Yet that’s something that we consider to be a bit of a silly way to decide upon which game to play. After all, you’ll win a degree of money regardless of which game you pick, but if you opt for one that you don’t even think is all that fun to play then you’re just likely to get quite bored quite quickly. Try to find one that ticks both the ‘decent RTP’ box and the ‘fun to play’ option, which we’re not sure Firemen does. It’s always worth giving it a go to see for yourself, though.