There’s not an awful lot to the Dynamite Digger game, but you’ll want to give our review a good read in order to figure out if it’s for you or not. 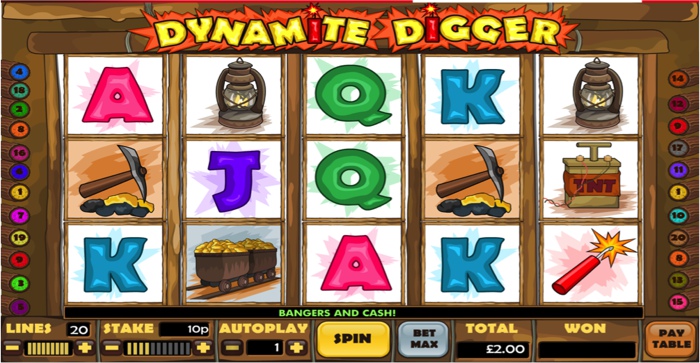 There’s only one interesting feature as part of the Dynamite Digger game, which we’ll tell you about now:

Nothing says ‘game based on mining’ like a feature that sees winning symbols explode. That’s presumably what was in the mind’s of the creators of Dynamite Digger when they added the Exploding Reels feature into the game’s settings. If you’ve played other slot games then you’ll know how this works, but just in case you don’t we’ll explain it.

In short, winning symbols will be assessed by the computer, with the winning amount from them added to your balance. After that they will explode, with new symbols dropping into the reels from above. If these new symbols create winning lines then they will also explode and be replaced, with this activity going on until there are no more winning lines. It means you can win more than once from the same line.

The Exploding Reels feature of the game is fun and might make you feel like you’ve got a decent chance of winning big, but is that actually the case? The Return To Player average of Dynamite Digger is 95.52%, which puts the game squarely in the ‘respectable’ category on that front. If you find a game that you enjoy with an RTP of 98% then we’d recommend you jump on it and never leave, for the simple reason that that’s one of the highest Return To Player figures you’ll find. Anything above that and you’re absolutely golden. In our experience, though, the majority of Virtue Fusion powered games tend to come in at closer to the 94% mark, so Dynamite Digger is definitely above average. Some people put a lot of thought into whether or not to play a game based on its RTP average, whilst to others it doesn’t matter at all. We’d always suggest that you’re best off trying to find a balance between an acceptable Return To Player figure and a game that’s fun to play.

On that front, then, how does Dynamite Digger do? Let’s start by looking at the consistency of the game’s theme – is it constant throughout your playing experience? The answer to that question is a resounding ‘yes’, from the moment that you start the game up and see a mine worker with a pickaxe ready to look for some gold. After that you’ll see a screen explaining the Exploding Reels feature that we told you about before, whilst some ‘hick’ music plays in the background. The music comes to an end with the sound of an explosion, letting you know that the game proper is about to begin. Everything about the game screams ‘consistency’, starting with the name of it that it sprawled across the top of the screen in exploding letters. Down the side of the reels you’ll see the line numbers, which sit on the end of wooden logs. That wood idea also plays out across the rest of the reels, given that the symbols appear to fall from within a wooden frame. Even the Pay Table, Spin and Bet buttons find themselves located on what looks like a plank of wood at the bottom of the screen.

Of course the theme being consistent is all well and good, but how does the game play? On that front you’ll be reasonably pleased, too – as long as you don’t have particularly high expectations. Let’s be honest, the game isn’t exactly graphics rich. As a consequence, the reels spin nice and smoothly and land in the screen without issue. There’s no blurring or other issue with them, meaning that you can see the symbols as they come in and land on the screen. The Exploding Reels feature is a fun one and one the works brilliantly in terms of fitting in with the way the theme plays out in other aspects of the game. It’s a little disappointing that it’s the only feature of the game, however. We’d have liked to have seen a mini-game within the slot that took you into the mine, for example, or made use of the TNT blasters that form one of the symbols. That might be unfair, though, when you consider that it’s not really the point of the game. This is supposed to be a mildly distracting affair rather than some sweeping epic and on that front it does exactly what it’s supposed to do. Worthy of a few goes, just don’t expect too much from it.