It might have a name that is vaguely reminiscent of an adult movie, but Dr. Lovemore actually promises some interesting gameplay and decent enough graphics to encourage people to return to it more than once. Read our full review and see whether or not you think it’s worth giving the Dr. a call. 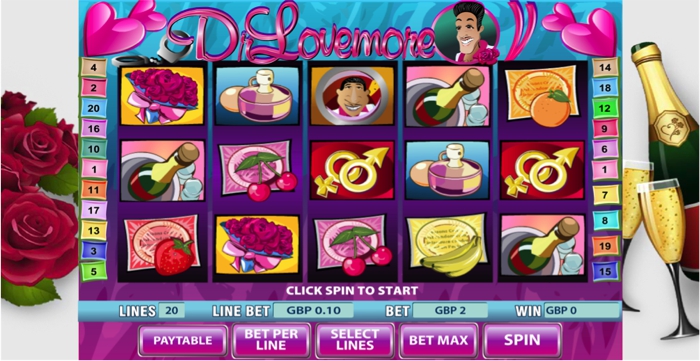 There are a couple of interesting features that you’ll be able to get your teeth into when player Dr. Lovemore, which we’ll explain as best we can here:

As you’d expect from someone with the name Dr. Lovemore, the protagonist of this particular story loves himself enough to have a personalised number plate. If it lands on the reel then it will act as a Wild, substituting in for any symbol apart from Scatters and the Dr.’s Pants. More of the latter in a moment… Get two or more Wilds on a pay line and they’ll pay out of their own accord.

There is one symbol with Dr. Lovemore looking straight out at you from an angle that is, frankly, not very flattering for him. Nevertheless, you don’t need to worry about what he looks like as if you see this symbol then you’re in luck, with an increased amount of winnings heading your way. Three of more of the Dr. Lovemore Scatters will see you receive a payout in addition to any line wins that you’ve collected, with the Scatter winnings calculated according to the total stake that you’ve played and the number of Dr. Lovemore Scatters you’ve landed on your reels.

Nothing says romance like seeing some greasy Lothario’s pants floating around the screen. You’ll be thinking about money more than being wooed if that’s something that you see on your reels, though, as it will mean that you might be able to get some Free Spins. If the good Dr.’s Pant Scatters land on reels one and five then you’ll be rewarded with twenty Free Spins. That’s not the only thing to get excited about, with all winnings collected during the Free Spins doubled. Also, if you see more Pants land on reels one and five then you’ll get more Free Spins. Watching a pair of pants spin around does sound like something more appropriate to people doing their washing, but if it means that you might get more money you’ll just have to suck it up. 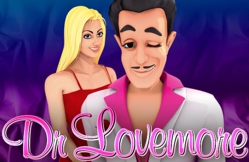 If you’re of a sensitive demeanour then it’s easy to see how Dr. Lovemore might not appeal to you. There’s something vaguely creepy about it, if we’re honest, including the bunch of roses that sit off the lefthand side of the reels and the pair of champagne glasses joined by the bottle of bubbly over to the right. Yet if you look a bit closer it won’t take you long to realise that this entire game is intended as a bit of fun, with the cartoon-like character of Dr. Lovemore clearly intended to represent the Hispanic cliches that you sometimes see on film and TV attempting to woo a lovely lady or two. That is reflected in the entire theme of the game, including the dodgy ‘adult movie’ music that you’ll hear if you’ve got your volume up. It’s also present in the symbols, which include some interesting options even aside from Dr. Lovemore and his underpants. There’s a Champagne Bottle in a cooler, for example, as well as a Bunch of Roses and the Golden Male & Female Symbols that are intertwined. If you take it all too seriously then you’ll miss the nice subtleties that the makers have thrown in, such as the leopard print background to the Pants symbol.

Away from the theme of the game is the way that it plays and on that front you’re unlikely to have any complaints. The symbols spin around the reels really smoothly, avoiding the blurring motion that can affect some of the more graphics-heavy slot games on the market. You can see exactly which symbol is on which reel as they move around, allowing you to get a sense of whether or not your spin is going to be a winning one. The various special features of the game are fun enough too, though it’s a little bit disappointing that you don’t get the chance to interact with them in any way. It would have been nice to decide whether or not you want to allow Dr. Lovemore to woo you or slap him across the face, say, with each choice resulting in a different number of Free Spins. That’s nit-picking, probably, but the seeming lack of control over how much you win or how many Free Spins you’re awarded can grow a little bit boring quite quickly for some. That will depend entirely on if you’re the sort of person that likes to feel as though you’re doing something or if you’re content with just pressing ‘Spin’ repeatedly and letting the computer do the rest.

When it comes to discussing Dr. Lovemore’s Return To Player average, it sits smack bang in the middle of the ‘mediocre’ category. 94.03% isn’t really worth getting all that excited about, with the games that we think offer the most attractive figure creeping up closer to the 98% mark. Nevertheless, the fact that it’s a fairly run-of-the-mill RTP means that there aren’t a huge number of games out there that will knock Dr. Lovemore off your radar. As a consequence, you’re better deciding how much time you want to spend with the mildly creepy Dr. by how much you enjoy the game itself and the special features that come with it. A decent-sized stake will see you playing for a bit of time without it whittling too far down, so perhaps give it a go and see what you make of it. It’s not really a game that is supposed to keep you engaged for hours and hours, though it’s decent enough to mean that you’ll probably stick around for a little it of time and return every now and again when you’ve got nothing better to do. If that’s the sort of thing that you’re looking for from a slot then Dr. Lovemore has got your prescription sorted.