Clover Rollover is a quick game that would serve well as a gentle introduction to the world of slots, mainly because of how simplistic it all is. Here’s our somewhat in-depth review. 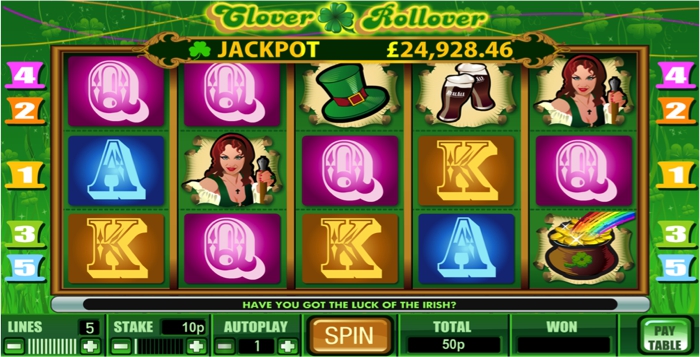 There’s nothing to get overly excited about when it comes to Clover Rollover, given that there are no Special Features worth shouting about. There’s actually just a normal win game to keep you entertained.

If you match three to five of the main symbols, apart from the one that triggers the progressive jackpot, then you’ll have your stake amount multiplied according to the number of symbols matched. Three Queens is the one you’ll want the least, with its multiplier of four, whilst five pots of gold at the end of the rainbow will result in a multiplier of seven and a half thousand.

You’ll be entered into the progressive jackpot if five Lucky Shamrock symbols land for you during an active game. They need to appear on a line that’s in-play and if that happens you’ll win a share of the progressive jackpot, dictated by how high your stake is. You’ll need to have paid the full stake of £5 in order to claim the entire jackpot, which stood at just shy of £25,000 at the time of writing. The less you pay, the less of a percentage you’ll be getting, all the way down to two percent for a 10p stake.

The game itself plays nice and smoothly, with symbols spinning around as you’d expect them to and landing without too much fuss. The overall theme of the game is also nicely realised, thanks to a green background and generally ‘Irish’ feel to the graphics used. Even the line numbers are to be found within an Irish hat shape. It’s a game that looks bright and entertaining, with the fact that the theme runs successfully throughout something of a bonus compared to some other games.

When it comes to what you’ll be needing to keep your eye out for, simply imagine an Irish cliché and you’ll be somewhere near the mark. From a buxom looking barmaid with a drinks lever in her hand through to a pair of glasses containing what looks suspiciously like Guinness, you’re not going to be surprised by the chosen symbols. That’s not something to complain about, of course, considering that the clichéd nature of it all is part of what lends the game its feel. Still, the gameplay is a little wanting on account of the fact that there’s nothing to grip you other than the standard spin of the reels. Given that nothing other than five Shamrocks is going to result in a massive spin, you won’t be sat around desperate for a Wild or other symbol to arrive as they don’t exist in the world of the game.

One thing that might draw you in is the Return To Player of 94%. That’s not exceptional, with games that boast something closer to 97 or 98% claiming that, but it’s good enough to pique the interest. You’re likely to be able to make a relatively small investment and play off it for a while. A minimum stake per line of 10p and a possible five lines means it’s not exactly a fortune to play either. It’s a perfectly interesting game with some redeeming features, but if you like your slots to be flashy and exciting then this isn’t going to be the one for you.