Here’s a look at the different aspects of Castle Cashalot that will interest you the most, including the game’s Special Features and the way the progressive jackpot works. 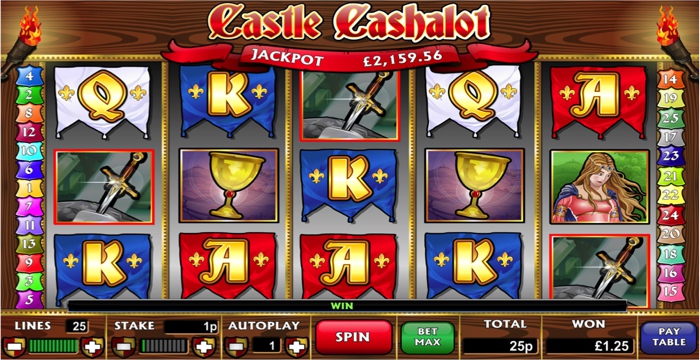 Some games have a huge number of Bonus Features that can be played throughout your gaming experience, whilst others only have a select few that you’ll see less often but are perhaps a tad more interesting. Castle Cashalot fits into the latter category, so here’s a look at the ones you’ll be able to experience:

When your spin results in symbols lining up in winning positions, they’ll explode the moment after you’ve been rewarded with your winnings from them. They’ll then be replaced with additional symbols and if they win then you’ll find that they also explode. That will keep happening until you run out of winning combinations, at which point the game will return to normal.

The other Special Feature of Castle Cashalot involves trying to remove Excalibur from the stone in which it stands. You’ll trigger this game if you see an Excalibur symbol in reels 1, 3 and 5 and the first thing you’ll need to do is ‘choose your glove’.

This can be a metal one as though from a suit of armour, a leather one or a bare hand. After that you’ll need to select a Strength and a Grip, with the hope being that select correctly to pull the sword out of the stone. The further out of the stone the character pulls Excalibur, the more you’ll win. If the sword comes out completely then you’ll win the jackpot. If it doesn’t get removed entirely then you’ll receive a multiple of your stake.

If you hit five Camelot symbols when your reels stop spinning then you’ll be a winner. The prize you’ll win is the progressive jackpot, or a share thereof depending on how large your stake per line is. If it’s just 1p then you’ll be rewarded with 0.5% of the full jackpot amount, whilst if it’s £2 then you’ll get all 100% of it. If you’re hoping to strike it rich, therefore, make sure that you play the full amount possible per line.

Castle Cashalot has a Return To Player amount of 94.4%. That’s well within the acceptable range, even if it’s not exceptional. Other games will give you a higher return if you’re willing to seek them out, but does that necessarily mean that you should play them? It largely depends on what you want to get out of a game. If you’re a fan of slots that promise countless Special Features then this one won’t be for you, for example, however if you like a medieval theme then this should keep you interested.

In terms of the actual gameplay, Castle Cashalot is a little disappointing. The graphics aren’t particularly modern or thrilling, which can be excused on account of the fact that it’s set in the medieval era of Arthur, Lancelot and the knights of Camelot. That’s all well and good, but the reels seem to blur as they spin and don’t seem to settle particularly well. That’s not great considering the number of games that are out there that perhaps offer players a little bit more than this one does.

That said, it’s often the storyline that appeals to players and Castle Cashalot has a cast of characters that you’ll recognise. From Guinevere with her luscious locks through to Merlin and his sorcery, you’ll perhaps feel as though you’re looking at a well illustrated version of the classic story. You’ll also see grail cups and, of course, Camelot symbols that are what you’ll need for a big win. The bonus game when a knight tries to remove the sword from the stone is fun enough, too. A decent game that could be better with more up-to-date graphics.