Cash Blox is unlike any traditional slot game you’ve ever played. Rather than jumping in with both feet, why not read our in-depth review and give yourself more of a clear idea about how it works? 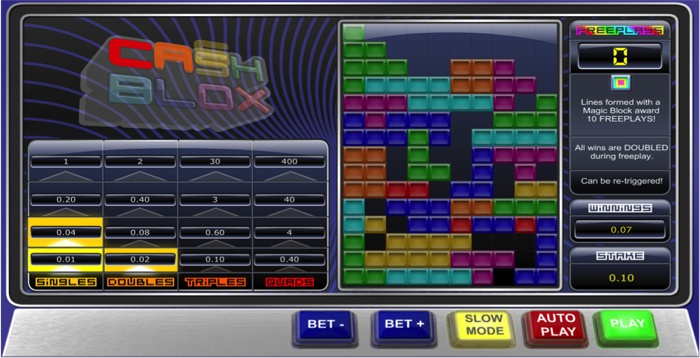 There’s only really one special feature to speak of when you play Cash Blox, which we’ll talk you through here:

Cash Blox features a Magic Block symbol that can drop at any time. If it does and features in a winning line then you’ll get ten Free Plays, which will begin after the current play has come to its natural conclusion. The Free Plays work much the same as the normal plays, with the major difference being that any wins during Free Play Mode will be doubled.

If you’re wondering how you’ll know whether or not you’re in Free Play Mode then fear not, the game isn’t all that subtle about it. The colour of the background screen changes, for starters, and a message will flash up onto your screen saying ’10 Free Plays’. It will keep going until all of the Free Plays have been used up, at which point the normal game will resume.

The Magic Block Free Play is the main feature of Cash Blox, but it’s worth briefly mentioning the fact that winning blocks will explode once your winnings have been counted. It means that you can win multiple times within the same go, given that the exploding lines obviously need to be replaced. If you remember the game Tetris from the 1990s then you’ll know how this works – when blocks fall into position to form a line they explode and you get points. The only difference here is that you get money instead of points.

Cash Blox is one of the more interesting games from the Virtue Fusion canon, if for no other reason than it’s so different from the more traditional game that are out there. There are no reels, there are no lines, there’s nothing that makes it resemble what you would likely think of when you hear the term ‘slot game’, apart from the fact that you press a button, something random happens and you might win money at the end of that. How much money is mostly down to fortune, though of course the size of your stake also helps to determine the end result. When it comes down to the rough amount you’re likely to win, Cash Blox boasts a Return To Player average of 94.5%. That’s just a shade above the average of 94% that you’ll find on the majority of games, though obviously some slip a little bit lower than that. It’s a fair chunk away from the 98% that we think is the ideal figure to look out for, however, so don’t expect to be able to play this game for all that long with only a modest initial stake.

In terms of the gameplay, it’s actually quite fun once you get into it. Those who are able to reminisce about their days playing Tetris on the GameBoy might get more out of it than those that have never heard of it before, but they’ll also find it quite frustrating. After all, in Tetris you could alter the way the blocks fell in order to get them to make up a line, whilst in Cash Blox the computer is in charge of any movement and they can only be shifted from left to right; the blocks themselves won’t be altered at all. That is, arguably, a fault on the part of the game makers. If they had created it so that you could turn, say, two or three blocks throughout the course of one play then it might have allowed players to invest in the slot a little bit more. As it is, you’re simply a bystander and have to hope the the computer will be kind to you and give you a couple of wins during your playing time. If that doesn’t bother you then you’ll obviously be fine, but if you’re the sort of player that likes to feel as though you’re doing something then you’ll get bored fairly quickly.

The Free Plays that kick in because of the Magic Block are a good addition to an otherwise quite bland game, but that’s a feature that also lacks the ability to allow players to feel involved. In fact, there’s an argument to say that you’re even less involved in that feature because the computer automatically plays the turns for you, meaning you don’t even have to click a button. All told, Cash Blox is a minor distraction that is unlikely to keep you returning to play it for very long. There can be no complaints about the theming, with the entire thing looking a bit like an arcade game. Even the ‘Bet’, ‘Slow Play’ and ‘Play’ buttons have a retro feel to them, with the rest of the game filled with colour and vibrancy. The background noise you hear if you’ve got your sound on is also quite well thought out, sounding as though you’re in an old games parlour until you press the ‘Play’ button, at which point you’ll hear a slightly more funky soundtrack take over. Ultimately, though, no amount of well thought-out theming is going to make you want to play this game for more than a few gos.