If you watch the introductory video that kicks in when you load up Cash! Bang! Wallop! then you’d think that this was one of the most complicated slot games in the world. Have a read of our review first and you’ll give yourself a fighting chance to understand what’s going on. 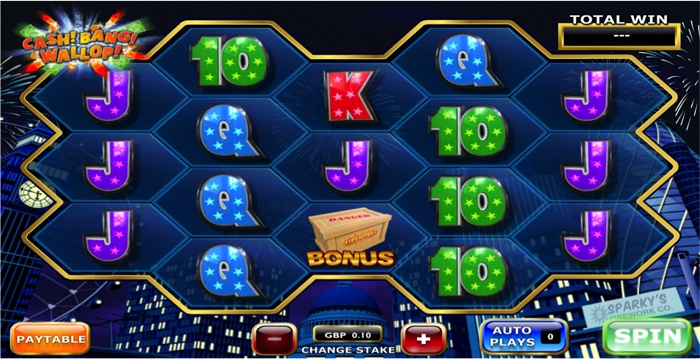 There are a number of different features in this game, including the way that you win in the first place. Here’s a look at what you need to know: 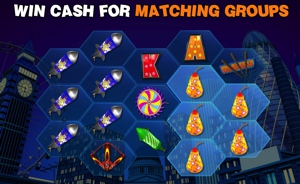 Unlike a traditional slot gamer, Cash! Bang! Wallop! doesn’t have normal pay lines. Instead, you’ll earn wins by landing groups of symbols next to each other within the game board. That’s why the game is able to make the boast that it has over 100,000 different ways of producing wins.

Cash! Bang! Wallop! Wilds! These work exactly as you’d expect Wilds to do, combining with nearby symbols to make them into winning combinations. They’re only half of the fun when it comes to Wilds in this game, however, as we’ll now explain. 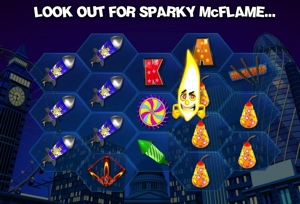 There is a fun little character in the Cash! Bang! Wallop! game named Sparky McFlame. He looks, perhaps somewhat unsurprisingly, like a flickering flame and can light any of the fireworks, turning them Wild and setting off a chain-reaction that could result in even more symbols becoming Wild. What dictates this is the type of firework that Sparky McFlame decides to light. Here’s a look at each of them:

If you head along to a Bonfire Night party you’ll notice that everyone loves Sparklers, even if they are a little disappointing when compared to the proper fireworks. The same is true in this game, with a Sparkler being lit up resulting in four symbols close by being made Wild. Not bad, but not as good as you’ll get from the bigger symbols of the game.

Roman Candles also light up four different symbols, but they’re more effective than Sparklers for the simple reason that lit Roman Candles will drop down to the bottom of the reel that they’re on before shooting their flame four cells high. If they light other fireworks as they do that then all the better.

If a Green Rocket is lit by Sparky McFlame then keep an eye on where it shoots off to. It will fire off in a random direction and, more importantly, turn the symbols that it flies across into Wilds. They can then make a significant number of losing lines into winning ones around the reels.

In the real world Trident is a topic that gets British politicians all excited, whilst in the reel world a Trident is a three-pronged firework that, when lit, will send its sparks off in three different directions. Those sparks will affect up to six other symbols, turning them all Wild. As with the Roman Candle, it will drop to the bottom of the reel that it’s on in order to ensure that it lights up as many different symbols as possible.

Super Rockets work in much the same way as Green Rockets, spinning around slowly before firing off in a random direction. It will also light up all symbols that it crosses the path of and make them Wild, with the major difference being that it will explode at the end of its journey. The explosion will result in two symbols close by also becoming Wild, which is good. 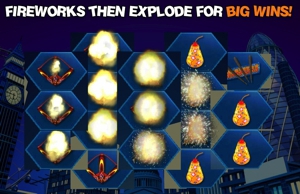 As well as the fireworks listed above, there are also Super Fireworks that can be lit by Sparky McFlame. The thing to notice here is that Super Fireworks won’t pay out on their own if they’re on your reels, but if they get lit up then they can turn a heap of symbols into Wilds and you’ll benefit accordingly. Here are the two Super Fireworks in the game:

If a Chinese Banger gets lit up by Sparky McFlame then symbols anywhere on the board could get turned into Wilds; that is to say, it doesn’t just affect the symbols that are close by. A larger number of symbols can be turned Wild by Chinese Bangers than standard fireworks.

If you’ve ever bought a Catherine Wheel then you know how it works – you nail it to a piece of wood and it spins around, sending sparks all over the place. They work the same in Cash! Bang! Wallop!, with the difference here being that it will result in nearby symbols becoming Wild rather than just terrifying the cat. 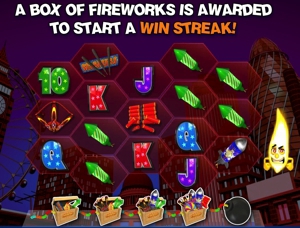 If you land a Fireworks Bonus symbol on lines One, Three and Five then you’ll trigger the Win Streak bonus. The symbol is a Crate of Fireworks and if the bonus comes into play then five new fireworks arrive to replace every crate. Sparky McFlame will then light each of the fireworks, turning them Wild and forming wins for you.

Every time five fireworks are lit a new crate arrives that will be even more powerful than the last one, resulting in larger wins. If you reach the Bomb at the end of the trail then you’ll get a chance to repeat the entire bonus round, winning even more. The Fireworks Bonus Round keeps going until there are no more fireworks left.

You could read through all of the above and be forgiven for thinking that you’ll never stop winning money if you play Cash! Bang! Wallop! The reality is, however, that the Return To Player average is 94%, which is decidedly average. There are games that have lower average RTP percentages, of course, but there are also ones that have significantly higher ones out there that you’ll be more inclined to play if you favour getting more money back for your initial investment over everything else. It’s just worth noting that talk of Super Fireworks and Bonus Rounds can lead you to get the impression that the money won’t stop flowing if you get a win, but when all is said and done the different format in play here doesn’t mean that it works any differently from a standard slot with reels and lines. How you win is different, but the mechanics of how likely it is that you will do so remains resolutely the same.

With that in mind, then, does the slot offer much in the way of gameplay to make it intriguing enough to get you returning to it more than once? The answer on that front is decidedly mixed. On the one hand, it is fun to see fireworks turn into Wilds and those of you that like to see all levels of a game will be keen to keep playing until Sparky McFlame has flown across the screen. On the other hand, it’s a little bit samey after you’ve played it for a while and all of the fireworks do essentially the same thing – increase your payout. That said, it is fun to watch Sparky McFlame arrive and turn one of the symbols into a potential money-maker. Watching a Super Rocket burst across the screen and then explode, for example, offers a slight thrill and briefly make you believe that you’ve got a good chunk of money heading your way. The game also plays smoothly enough, with each ‘honeycomb tile’ spinning over rather than rotating around. This puts less stress on the game’s graphics and means there’s no blur to speak of.

If you’re a fan of a consistent them within a game then you’ll likely be pleased with what Cash! Bang! Wallop! has to offer. As soon as the game starts you’ll hear the sound of ‘fireworks’ exploding off in the distance, whilst the reels sit in front of what is supposed to be London’s skyline. On the righthand side you’ll see Big Ben, whilst over to the left you’ll be able to recognise the Gherkin. St. Paul’s Cathedral is nestled neatly at the bottom underneath the stake amount. There are fireworks in the sky away from the reels, whilst within the game screen you’ll find plenty of symbols that all fit the theme. We’ve already mentioned all of the fireworks, but even the 10, J, Q, K and A symbols have stars in them to keep them inline with everything else. The Bonus Round is fun enough, though perhaps it might have been made a little more interactive. That might just be us being picky, however, given that the game is only really here to offer a quick distraction to players.