Whether you’re a lover of peg-legs or just someone that fancies the idea of finding a lot of money at the bottom of the ocean, Captain’s Treasure will likely intrigue you briefly. Here’s an explanation of how the game works and what you need to know about it. 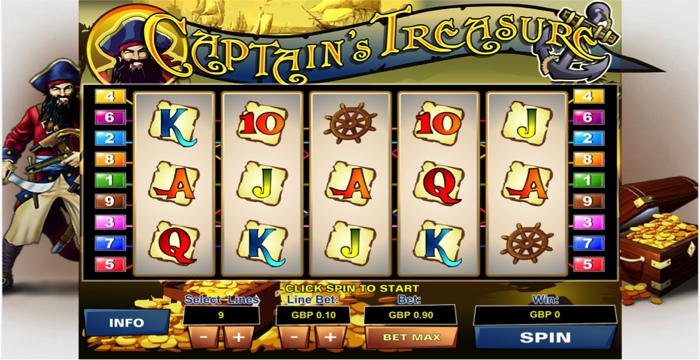 There are two mildly interesting factors in play in the Captain’s Treasure game, which we’ll explain here: 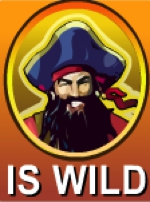 Ordinarily, if a weird looking bearded man appeared to wink at you and repeatedly thrust his hand towards you in a ‘thumbs up’ gesture you’d probably try to make a reasonably quick escape. When you’re playing the Captain’s Treasure slot game, however, it’s good news – it means you’ve landed a Wild symbol. As a consequence, potentially losing lines can become winning ones and you’ll earn some money.

The Captain Wild symbol won’t appear on lines one or five, instead being limited to two, three and four. If you get one then you’ll find that your winnings for that line are doubled. It doesn’t matter how many Captains you get on your line, it will still only be doubled. That is to say, if you get three Captains on a winning line of £1 then you’ll be rewarded with 2x£1, not 3x2x£1. The Captain Wilds can replace any symbol on the game apart from Scatters.

Captain’s Treasure lacks interesting games for you to play in between reel spins, but both of the special features are designed to pay you extra money on top of your winnings. In the case of the Captain Wilds your win line prize will be doubled, whilst in the case of the Treasure Chest Scatter you’ll find your total bet is increased. You can get between two and five of the Treasure Chest Scatter symbols on your reels, with the amount you land dictating how much extra you’ll win.

In order to count towards the game, Treasure Chest Scatters must land on consecutive reels. They don’t all have to be on the same win line though, which is good. That means that if a Treasure Chest Scatter appears on reel two and another on the same line of reel five you won’t get anything from it, but if they appear on reels three and four on different lines then you will. Scatter wins are added to the wins you’d receive anyway from a winning payline, Two Scatters will see your total bet amount multiplied by one, three Scatters and it’s multiplied by five, four sees it multiplied by ten and get all five and you total bet will be multiplied by one-hundred.

The Return To Player average on the Captain’s Treasure game is a very healthy 97.06%. That’s pretty close to our favoured number of 98% and much-improved on the average of 94% that you’ll find on the majority of Virtue Fusion games. It means that punters can start with a relatively small opening stake and potentially play for a while, with a chunk of their money coming back to them during play. It’s an average though, don’t forget, so if you play for ages then it’s just as likely to disappear. That’s why we never suggest that an RTP average should dictate whether or not you play a game regularly. Admittedly, the 97.06% offered by Captain’s Treasure is an attractive number, but if you only go off that and don’t consider whether or not you actually enjoy the gameplay then you’re always likely to end up a little bored or disappointed. With that in mind, how does the game look and is interesting enough to capture your attention?

Let’s start by talking about the theming of Captain’s Treasure. If you’ve got your volume up then you’ll notice that a pirate-style shanty kicks in as soon as you load up the slot, making absolutely clear what sort of game you’re going to be playing. The flip side of that is that it’s clearly a computer creation, which might also give you a bit of a sense of how the game is going to play out – style over substance. Let’s face it, Pirate’s of the Caribbean this ain’t. The game is full of colour and the chosen theme can be seen across the majority of the visuals. You’ve got the Pirate Captain stood off to the left, with an open Treasure Chest on the right and gold spilling across the floor. The title of the game is writ large across a banner that looks as though it’s supposed to be a pirate’s sword, with typically ‘pirate’-style writing in place. Even the Bet buttons seem to be made of some sort of wood. Add into all of that the fact that the symbols are made up of things like a Ship’s Wheel, an Anchor and a Treasure Map and you can soon see that some decent thought has been put in to how the game will look.

Yet it’s very much all surface, with the lack of more interesting special features meaning that most players will get bored rather quickly. Wilds are a great function to add into any slot, given that everyone likes the chance of a losing line becoming a winning one. The Treasure Chest Scatter could have been more interesting, though. Why not make it a game that takes players on a journey around the map, earning money as they go? Land on the Treasure Chest and you could end up winning the full amount of one-hundred times your total bet, for example. Instead it’s just a bit more money going into your account automatically. Everyone loves winning money, of course, but if you want repeat visitors then you’ve really got to try to make the game itself more interesting. The game plays really nicely from a technical point of view, though. The graphics aren’t too heavy and it’s a recent enough release to mean that the reels spin smoothly.