Simon Cowell is notoriously hard-nosed and cruel when he judges acts on Britain’s Got Talent, so it’s only right that we treat this slot with the same critical eye. Our full review will let you know whether or not to let the game through to the final. 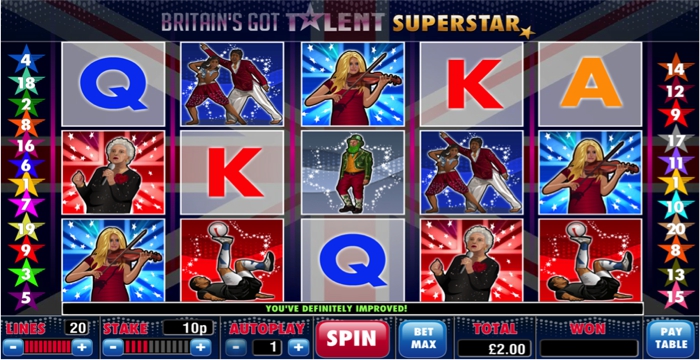 There’s only one special feature in play in the Britain’s Got Talent Superstar slot game, so this is what you need to know:

If you get any winning combination of symbols whatsoever then you’ll not only collect the associated winnings, but also benefit from the game’s Exploding Reels feature. This is a fairly common one for game makers to use as it’s nice and easy for them to implement but present the opportunity for a decent-size win for the punter playing it.

The way it works is that any winnings reels will ‘explode’ as soon as they’ve been evaluated, resulting in the symbols above them dropping down to fill the gaps. Obviously that will leave more gaps, so brand new symbols will enter the game to fill those space. If the movement of symbols results in more winning lines being formed then they will explode too, with the process carrying on until no more winning lines are created.

In terms of a Return To Player average, 95.5% is probably in the ‘above average’ category. That’s not the same as ‘excellent’ or even ‘very good’, though, so do remember that when you sit down to play Britain’s Got Talent Superstar. It’s a whisker better than the 94% you’ll find on the majority of Virtue Fusion games, but it’s still well short of the 98% RTP that we recommend you keep an eye out for when you’re looking for a slot to play. There are countless reasons why it’s never a good idea to play a game based solely on the average amount you’re going to get back, not least of which is the fact that even those with the highest Return To Player average on the market don’t pay out every single time you press ‘Spin’. The most important thing is perhaps the gameplay, so how does Britain’s Got Talent Superstar stack up on that front?

The first thing that should be pointed out is the fact that the theme of the game is actually really well put together. When you first start the slot up you’ll hear that well-known Britain’s Got Talent theme kick in, letting you know that you’re playing a game that is heavily themed around the TV show of the same name. ‘Britain’s Got Talent’ adorns the top of the reels, complete with the famous star symbol in place of the ‘A’ on Talent. The line numbers all sit inside stars that boast different colours, giving the game a genuinely bright and boisterous feel. The symbols are really quite fun, too. Though the Q, K an A symbols are a bit plain and uninspiring, the rest are make up of ‘acts’ doing some sort of performance. These include a Dancing Couple, a Football Skills lad, a Singing Grannie and a Dancing Dog. The only exception to that is the Britain’s Got Talent symbol itself.

Sadly the actual gameplay lets the experience down a little bit. Despite the fact that there isn’t actually much going on in the game, the graphics aren’t good enough to allow the reels to spin smoothly. Instead there’s a distinct blurriness to the whole experience, which is bound to make the eyes and head of those a little sensitive to the movement ache a little bit. The sound does become a bit tense when the reels are spinning, but that doesn’t alter the fact that the gameplay is just a bit naff. In the absence of a jackpot you feel as though this game needs something a bit more interesting to get players to return and the Exploding Reels feature probably isn’t it. Yes, it gives you an increased chance of winning, but the reality is that more often than not the winning symbols disappear and those that replace them are losers, making the whole exercise rather pointless. Given the theme that the game is playing with, could they not have added a bonus game that sees you ‘perform’ in front of the audience or something? It’s not designed to be anything other than a mild distraction, which is just as well as it doesn’t achieve much more than than that.