Bar-X is a simple enough gamer to understand, but reading our full review will give you an idea of whether or not it’s something that you’ll fancy playing. 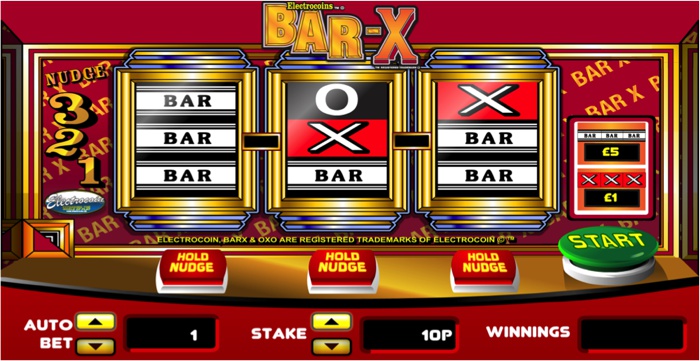 There aren’t really any special features as such, but there are some bits that you’ll want to know about. We’ll explain them here:

As with a classic one-armed bandit, you can be awarded Nudges during your gameplay. If you are then you’ll need to use all three of them in one go, meaning that you can’t hold onto any for a later date. If you get a winning line after using the first or second nudge then you won’t need to use the third one.

Again, as with a more traditional slot machine you’ll find that Holds can be awarded during your playing of Bar-X. If this happens then the Hold / Nudge buttons underneath the reels will light up and you’ll be able to select whether you’d like to Hold all three of the symbols, two of them, one of them or none of them whatsoever. Given that this is a single-line game, holding potentially winning symbols would be a wise strategy.

The game boasts a couple of hidden features that it’s worth letting you know about. The first dictates that if you get three Holds in a row then the third one will always be a winner if neither of the other two resulted in a win. You’ll have to have held the same reels with the same symbols on in order to trigger this. You’ll also need to ensure that two of the symbols matched, so holding one symbol alone won’t trigger this feature.

The second hidden feature involves receiving manual Holds after you’ve played your Nudges and not been rewarded with a win. In this circumstance, if you choose to not hold any reels then it will result in an automatic win.

This isn’t really a feature, but it’s still worth drawing your attention to. You can’t vary how many lines you play but you can vary the size of your stake. Doing so will obviously increase the amount you win, with three Xs landing on the middle row seeing your stake multiplied by ten and three Bars resulting in your stake being multiplied by fifty. The minimum stake is 10p and the maximum is £20.

There’s something really refreshing about Bar-X’s gameplay, which is the fact that it’s so old-school. In this day and age of crazy graphics and madly in-depth story-telling involved in slot games, it’s great to go back to basics for a little bit. Admittedly it’s not the sort of game that’s going to keep you gripped or have you returning time and again to play, but it does act as a minor distraction at a time when other games suck you in to their world and you need to drag yourself away. The theming of the game is perfectly judged, with the entire thing looking like a computerised version of a pub slot machine. If you’ve got a good imagination then simply looking at the reels will get you smelling beer in your nostrils and hearing some terrible jukebox selection somewhere in the background. From the big green ‘Start’ button that flashes at you invitingly through to the old-fashioned looking Xs and Bar symbols, this is a game that those of a certain generation will recognise instantly.

There’s even some hidden features, which players of genuine one-armed bandit slots will remember from the past. Whether or not you remember to do it correctly when the opportunity arises is an entirely different matter, of course! There’s a fun little sound that plays out when you hit the ‘Start’ button, emitting some beeps that indicate whether or not you’ve won your game. The reels spin smoothly, with the lack of graphics needed to power the game ensuring that they don’t go too blurry or anything as they turn. The use of the Hold / Nudge button is fun, letting you turn a losing line into a winning one. Perhaps you could criticise the fact that you don’t really know when or if the buttons are going to become active, but that might just be a little bit churlish, all things considered. It’s never going to keep you occupied for hours, but then it’s not really designed to.

Given the gameplay is fun but not overly complicated, what will get you coming back for more? Certain not the Return To Player average, which hovers around the 92 to 93 percentage mark. That’s quite disappointing for a game that doesn’t have the sort of storyline that’s going to attract players, but it’s also perhaps slightly understandable; after all, the win on this game is binary. That is to say, on some games you can bet 10p and win anywhere from 1p to many pounds, whereas with Bar-X a win will definitely result in you getting back more than you staked. That means that if you do win you’ll likely win enough to make you smile. Even so, it’s not an RTP that gets us excited and makes us want to go running back to the game whenever we log on to our account. How much you play Bar-X will be determined by how much you enjoy the old-fashioned nature of it and how much winning vast sums of money matters to you, rather than the Return To Player average.