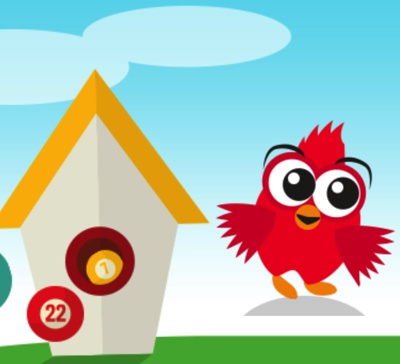 There tend to be three different categories that bingo sites can fit into. Firstly they could be a massive site with a brilliant reputation in the industry, with the likes of Gala Bingo being a good example of this. Secondly the bingo rooms could be an additional arm of a bookmaker, with the betting company having expanded their remit to become something of a jack-of-all-trades by offering bingo on top of their sportsbook and so on. Finally, there are a few smaller sites out there that appeal to something of a niche market but are no less exciting to use because of that. BOGOF Bingo definitely fits into that latter category.

The company takes its name from one of the many variations of bingo games out there, namely the Buy One Get One Free games that see you receive extra tickets for the same amount of money. If some of the sites styling and set-up reminds you of anything then it will be because it’s part of the same family as Bucky Bingo, with both being an affiliate site of Betfred. On this page we’ll tell you more about the company’s history as well as some of the bingo rooms you’ll find if you become a member and start to play. We’ll also tell you how you can bank with them and we’ll start by letting you know about their VIP Club.

BOGOF Bingo’s VIP Club doesn’t work in quite the same way that other bingo sites tend to use loyalty programs. Unlike typical loyalty schemes, whereby you’ll find that company’s reward you the more that you play bingo on their site, BOGOF Bingo have opted for a VIP Club that gives regular rewards to players irrespective of the number of games that they play or amount of money that they wager.

VIP Club members will be on the receiving end of the same sort of deals and promotions that regular players get – after all, you wouldn’t be a Very Important Person if a normal member got more than you! – but they’ll also receive significant other benefits during their membership. This includes, but is not limited to, the following:

The status you reach within the VIP Club is dictated by you wagering and depositing history, so the more you deposit and then play with the higher in the Club you’ll climb. That includes the necessity to place a deposit at least once a month if you’d like to remain as a VIP. As we’ve already mentioned, it’s not quite the same as some more typical loyalty programs, but it’s still well worth your time getting involved with it if you’re a regular bingo player. 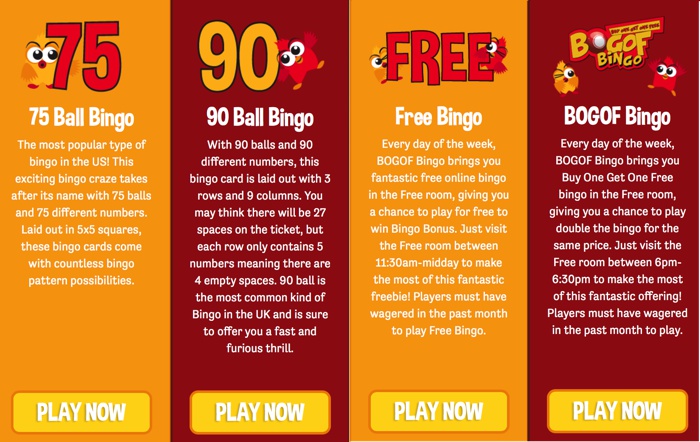 Virtue Fusion provide the software that runs the bingo games on all of the sites we talk about on this website, but that inevitably means that there can be a bit of a crossover between the rooms you’ll be able to play on a Playtech powered bingo site. As a consequence, they all have some rooms that are exclusive to them, with the following being examples of the rooms you’ll be able to play in at BOGOF Bingo:

Although the rooms themselves can be very different, there are still certain themes that run from one website to another. In this instance that theme is the idea of playing bingo quickly and without delay in a room where speed is of the essence. At BOGOF Bingo that room is called Speed Bingo and it’s a 90 ball room that doesn’t waste any time in getting into the bingo.

A room that offers a host of different game types, Main Event is where you’ll want to head to if you feel like sampling a host of different versions of 90 ball bingo. They often have 1p games, for example, allowing you to play for very little money.

1p isn’t a lot to pay in order to play bingo, but free is even cheaper! This 90 ball bingo room isn’t open all the time but when it is open it’s worth heading to; especially if you don’t know a huge amount about bingo and would like to learn how to play.

75 ball bingo is a little bit different to 90 ball bingo in how it’s played, with BOGOF Pattern being the proof. Instead of looking for the usual run of numbers to get a line or House, you’ll be hoping that the balls come out in a specific order that brings up a pattern on your card like a T or a cross.

In truth you’ll likely find that, in keeping with both Bucky Bingo and Betfred, there’s not a huge amount of difference in terms of graphics when you enter thee different bingo rooms. If you’re hoping for some excitement and interest in what you’re looking at then you will either want to play the bingo games that you can find on any Virtue Fusion site, such as Who Wants To Be A Millionaire?, or you’ll be looking to the various side games that BOGOF Bingo have to offer. You’ll find these at the top of the Bingo Lobby area of the site, separated into different sections. If you’ve selected any favourites since you’ve joined the side, for example, then they’ll be in the first tab.

Not everyone likes to select favourites or knows how to do it, so instead you can simply view all of the games that are new. After that you’ll be able to limit what you’re looking at to just scratch cards or simply see the slots on offer. The other alternative is to go the BOGOF Bingo landing page. When you’re there you’ll see tabs at the top that will take you to an area that will tell you all about the current promotions. There’s also one for the bingo itself and another labelled ‘777 Games’. It’s on this final page that you’ll find even more slots and games that you’ll be able to play at your own leisure. If you’ve ever looked at similar games on other Virtue Fusion websites then it’s unlikely that any of these will take you by surprise.

BOGOF Bingo is purely a bingo and games site, so you won’t find a sportsbook or outlandish casino attached as you would if you went to the parent site of Betfred. Even so, they have taken some of the payment methods that you’d be able to use with Betfred and ensured that they’re available to everyone. That includes the usual method of being able to make a deposit with a debit card, with a minimum deposit amount of £5 and a maximum of £1,000. As far as debit cards are concerned, the maximum you’ll be able to withdraw in one go is £10,000 and the minimum is £10.

Not everyone is used to using old school methods like debit cards to make deposits and withdrawals, of course. If you’re a more modern bettor then you might be interested in using the likes of Skrill, NeTeller, PayPal and PaySafeCards to deposit money into your account,. Whichever method you choose, BOGOF Bingo won’t charge you any money to make a transaction, though they can’t promise that your provider won’t. You’ll also find that the minimum deposit and withdrawal amounts and the maximum you can deposit and withdraw are the same, whether you want to use a MasterCard, a Visa or an e-wallet. In other words, they keep things nice, simple and ordered for you.

All three sites have a lot of similarities when it comes to the actual bingo that you can play on them, though they are run as three separate entities. There’s not a huge amount more to say about BOGOF Bingo, except that it underwent an overhaul in 2014 to bring the site as up to date as possible. Betfred, meanwhile, is one of the biggest bookmakers in the United Kingdom. As well as an impressive online operation the Warrington-based company also owners over one and a half thousand physical shops around the country. It’s safe to say, therefore, that BOGOF Bingo has both a good pedigree and something of a heavy hitter backing it behind the scenes.